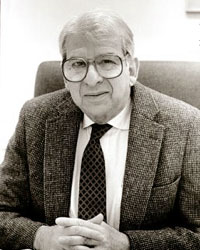 Lester Grinspoon is Associate Professor Emeritus of Psychiatry at Harvard Medical School and the author of several drug-related books, including Marijuana Reconsidered, Psychedelic Drugs Reconsidered, and Marijuana: The Forbidden Medicine. The first two were published during the 1970s, when it appeared cannabis was well on its way to nationwide decriminalization in the United States. The latter was published in 1993. It describes a variety of ailments for which cannabis ingestion may be indicated.

As a doctor, Grinspoon was the first American physician to prescribe lithium carbonate for bipolar disorders. He also founded the Harvard Mental Health Letter, and was its editor fifteen years.

Grinspoon originally endeavored to write Marijuana Reconsidered in order to build a case against marijuana, but as his research progressed, he realized the complexities of the plant and was moved to advocate for legalization. He has testified before Congress and as an expert witness in various legal proceedings, including the deportation hearings of John Lennon. Grinspoon worked with Ramsey Clark on a number of international marijuana-related incidents.

Dr. Grinspoon runs a website that allows for people to submit essays relating to the “enhancing” effects that marijuana can have on the user. The focus is on effects which are meaningful for the individual: not merely “increased appetite,” but rather effects such as increased creativity, rushes of insight/new ideas, or increased appreciation for music, art and nature. Grinspoon has discussed the way marijuana helped his young son while he was dying from leukemia in the 1970s, completely eliminating the horrible nausea and vomiting he experienced after each of his chemotherapy treatments and, thereby, making the final year and a half of the boy’s life far more comfortable.

Click here for supplemental reading about Lester Grinspoon on Amazon.