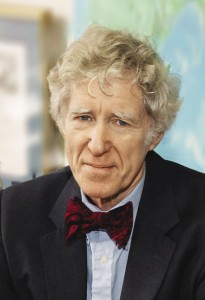 The Washington Post called Lester Brown “one of the world’s most influential thinkers.” The Telegraph of Calcutta refers to him as “the guru of the environmental movement.” In 1986, the Library of Congress requested his personal papers, noting that his writings “have already strongly affected thinking about problems of world population and resources.”

In 1974, with support of the Rockefeller Brothers Fund, Lester Brown founded the Worldwatch Institute, the first research institute devoted to the analysis of global environmental issues. While there he launched the Worldwatch Papers, the annual State of the World reports, World Watch magazine, a second annual entitled Vital Signs: The Trends that are Shaping Our Future, and the Environmental Alert book series.

Brown has authored or coauthored 50 books. One of the world’s most widely published authors, his books have appeared in some 40 languages. In May 2001, he founded the Earth Policy Institute to provide a vision and a road map for achieving an environmentally sustainable economy.

Eco-Economy: Building a New Economy for the Environmental Age