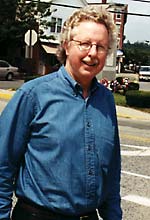 Langdon Winner is a political theorist who focuses upon social and political issues that surround modern technological change. He is the author of Autonomous Technology, a study of the idea of “technology-out-of-control” in modern social thought, The Wale and the Reactor: A Search for Limits in an Age of High Technology, and editor of Democracy in a Technological Society.

Praised by The Wall Street Journal as “the leading academic on the politics of technology,” Mr. Winner was born and raised in San Luis Obispo, California. He received his B.A., M.A. and Ph.D. in political science from the University of California at Berkeley. He is Professor of Political Science in the Department of Science and Technology Studies at Rensselaer Polytechnic Institute in Troy, New York, where he serves as co-director of the newly founded Center for Cultural Design.

The Whale and the Reactor: A Search for Limits in an Age of High Technology by Langdon Winner.