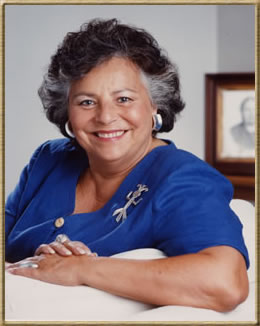 LaDonna Harris, President of Americans for Indian Opportunity, is a statesman and national leader who has devoted her life to building coalitions that create change. She has been a consistent and ardent advocate on behalf of Tribal America. In addition, she continues her activism in the areas of civil rights, environmental protection, the women’s movement and world peace.

Raised in Indian country on a farm near the small town of Walters, Oklahoma, during the Great Depression, she spoke only Comanche when she entered grade school, and because of her unique upbringing, Harris views all things with the wisdom and values of two cultures.

Harris began her public service as the wife of U.S. Senator Fred Harris. Her partnership with Senator Harris made her a strong force in Congress, where she was the first Senator’s wife to testify before a Congressional committee. She was instrumental in the return of Taos Blue Lake to the people of Taos Pueblo and to the Menominee Tribe in regaining their federal recognition. Her guiding influence on both pieces of legislation led to landmark laws that set a precedent that still guides Indian policy today.

For more than three decades, Harris has been a strong voice for Native American rights. In helping tribes plan for the future, Harris recognizes the significance of the Information Age and the impact computer technology will have on tribal communities. She has created the first Indian-owned and operated computer telecommunications network—INDIAnet—dedicated to establishing and developing free public access to electronic information and communication services for Native Americans.

As a national leader, Harris has influenced the agendas of the civil rights, feminist, environmental and world peace movements.