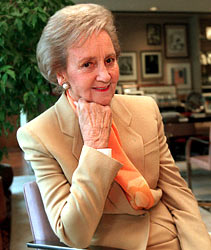 Katharine Graham was born in 1917. Her mother, Agnes Meyer, was an educator, and her father, Eugene Meyer, was a publisher. He purchased the Washington Post in 1933, and Katharine Meyer began working for the Post five years later. She married Philip Graham in 1940, and in 1945 left the Post to raise her family.

In the next few years Philip Graham became publisher of the Post and bought out Eugene Meyer’s voting stock. During this time, the Washington Post Company also acquired the Times-Herald and Newsweek magazine.

In 1962, Philip Graham committed suicide, and Katharine Graham assumed control of the Washington Post Company. From 1969 to 1979 she was also publisher of the newspaper.

From 1973–1991, Katharine Graham, known to many as “Kay,” was board chairman and chief executive officer of the Washington Post Company, and remained chairman of the Executive Committee until her death.

In 1997, Katharine Graham published her memoirs as Personal History. The book was lauded for its honest portrayal of her husband’s mental illness. She was awarded the Pulitzer Prize in 1998 for this autobiography.

—Courtesy of “Women’s History” on About.com

Click here for supplemental reading about Katharine Graham on Amazon.