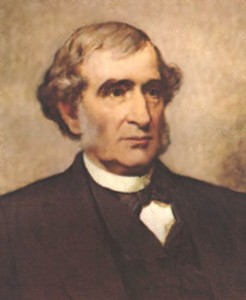 Portrait in the Senate Wing of the United States Capitol

Morrill was the driving force behind both the 1862 and 1890 U.S. Congress’s creation of land grant universities in every state. While considered the greatest education legislation in U.S. history, passage of Morrill’s College Land Bill was far from certain and deeply controversial. During congressional debates in 1859, James Mason of Virginia labeled the bill “one of the most extraordinary engines of mischief,” a misuse of federal property, and “an unconstitutional robbing of the Treasury for the purpose of bribing the States.” Ohio Congressman George Pugh said the bill involved “as atrocious a violation of the organic law as if it were the act of an armed usurper.”

In hindsight, it’s hard to believe that such a far-thinking, visionary, and beneficial legislative proposal could have engendered such bitter opposition. There was wide support among voters for the bill, but Southern states were vehemently opposed to Morrill’s bill. President Buchanan finally vetoed it at the urging of Democratic senators led by John Slidell of Louisiana. With this veto, the bill was effectively dead until after the 1860 election.

With the election of Lincoln, prospects for passage improved, although pressing Civil War matters took precedence. Morrill introduced the bill in December 1860, but opposition in the House, this time from Western states, delayed consideration for six months. Meanwhile, friends in the Senate moved a version of the bill and won approval, even though Kansas and Minnesota opposed the “college land bill” as a dangerous giveaway to land speculators. After several attempts to delay and amend the bill in the House, it finally passed, and President Lincoln signed it into law on July 2, 1862.

Morrill was a staunch Republican. A fiscal conservative, he opposed large government surpluses and overtaxation; opposed Congressional pay raises, actually giving back his raise to the Vermont treasury; voted for a guilty verdict at the impeachment trial of a president; and championed the needs of his rural constituency.

But in other ways, Morrill was clearly a man of his own times. He opposed women’s suffrage, opposed the eight-hour work day, and supported a movement to incorporate Canada into the United States.

Morrill, however, is best remembered for his efforts to provide federally supported education to the common people and to ensure that emancipated slaves would have access to the same educational opportunities as others.