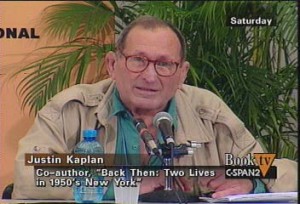 Justin Kaplan received his bachelor of science degree from Harvard University in 1944. After pursuing a post-graduate degree for two years, he left graduate school to work for a publishing house, where he eventually became senior editor.

Kaplan left publishing for writing in 1959 and began work on his first biography, Mr. Clemens and Mark Twain, a study of the famous author that was published in 1966. The book was a tremendous critical success, winning both the Pulitzer Prize for biography and a National Book Award in 1967. He followed this up with two more well-received biographies, Lincoln Steffens, A Biography (1974) and Walt Whitman, A Life (1980), which won an American Book Award, He also edited several anthologies and the 16th edition of Bartlett’s Familiar Quotations (1992)

Kaplan married author Anne Bernays in 1954 and has written a double memoir with her entitled Back Then: Two Lives in 1950s New York.

Click here for supplemental reading about Justin Kaplan on Amazon.