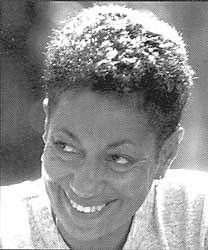 June Jordan, who died aged 65, after suffering from breast cancer for several years, defied all pigeonholes. Poet, essayist, journalist, dramatist, academic, cultural and political activist—she was all these things, by turn and simultaneously, but above all, she was an inspirational teacher, through words and actions, and a supremely principled person.

Among African-American writers, she was undoubtedly one of the most widely published, the author of well over two dozen books of non-fiction, poetry, fiction, drama and children’s writing. She emerged onto the political and literary scene in the late 1960s, when the movements demanding attention were for civil rights and women’s liberation, and anti-war. She engaged with all of these and more, for her battles were for freedom, whether that involved planning a new architecture for Harlem with her mentor Buckminster Fuller, or speaking out on the Palestinian cause. She spoke out against, or did something about, oppression wherever it was to be found.

The years when she was struggling to make ends meet as a single mother were also her formative years as a writer. Her first book of poetry, Who Look At Me, was produced in 1969, and was followed by a steady stream of publications in different genres, including Things That I Do in the Dark (1970), Passion (1980), Living Room (1985), Lyrical Campaigns (1989), Poetry for the People: A Blueprint for the Revolution (1995), Affirmative Acts: Political Essays (1998), and a memoir, Soldier: A Poet’s Childhood (2000).

Her life was about challenging oppression, and her characteristic talent was the ability to lay bare through her writing “the intimate face of universal struggle.” Alice Walker has said of her: “June Jordan makes us think of Akhmatova, of Neruda. She is the bravest of us, the most outraged. She feels for all. She is the universal poet.”

For Toni Morrison, the sum of June Jordan’s career was: “Forty years of tireless activism coupled with and fuelled by flawless art.” All that aside, she was a joy to know.