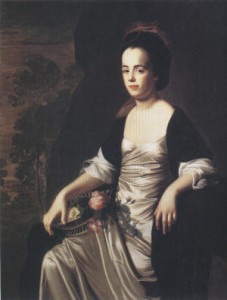 An important writer and early advocate for equal rights for women, Murray also made many contributions to the development of Universalism. Judith Sargent was born May 1, 1751, the daughter of Winthrop Sargent, a wealthy sea merchant and intellectual, and Judith Saunders Sargent. Her father had been rethinking his faith when he invited John Murray to preach in Gloucester, Massachusetts in 1774. Judith was the oldest of eight children, and under the tutelage of her father received a fine education. The family had a large library, and Judith practiced writing constantly, mostly poems. In 1769 Judith married John Stevens, a sea captain. They had no children of their own, but Judith cared for her husband’s orphaned nieces, and also took on boarders. She became an advocate for equal education for boys and girls, and in 1782 she wrote a Catechism, which was her first publication, and one of the earliest Universalist writings.

After the Revolutionary War, her husband fell into debt and left for the West Indies to escape debtor’s prison, and he died there. Widowed and poor, Judith took up writing in earnest. Ever since her father had brought John Murray to Gloucester, Judith had corresponded with him, and in 1788, they were married. Judith had two children, the first was stillborn, but the second, Julia Maria, survived, even though she was a sickly child. Judith’s writing bore fruit with poetry at first, but later she turned to essays.

Her most famous essay, “On the Equality of the Sexes,” perhaps the first published argument in America for women’s equality, appeared in 1790. Here she wrote “our souls are by nature equal to yours; the same breath of God animates, enlivens and invigorates us . . .” Murray said that women were equal in mental powers of reason, memory, judgment and imagination. Because they did not have a positive sense of themselves, she said women were unable to resist the marriage market. Her poems appeared in Massachusetts Magazine, and she also wrote an anonymous column called “The Gleaner” under the pseudonym Constantia. Here she argued for many political issues including equal education for women, and the raising of children. She said that women should be accustomed to habits of industry and order, and that “independence should be placed within their grasp.” She even argued at one point that if women were made physically weaker, then they must have been given greater intellectual gifts.

In 1791 the Murray’s moved to Boston. She was writing poetry at this time, and it proved more popular than her essays, but she often had no forum after 1796 when the Massachusetts Magazine stopped publishing. Murray’s skills as a writer were multi-faceted. She also wrote plays, the first of which, The Medium or Happy Tea Party was performed in Boston in 1795. Here the main character is suspected of wanting to marry for money, but she proves her worth by refusing to marry unless the man she loves does so on equal terms. In 1798 she published three volumes of The Gleaner columns. In 1802 she assisted two other women with the formation of The Ladies’ Academy in Dorchester, Massachusetts. After her husband’s death in 1815, she helped finish his biography, Records of the Life of the Rev. John Murray, Written by Himself, with a Continuation by Mrs. Judith Sargent Murray. With some trepidation she left Boston in 1818 to live with her daughter and son-in-law in Natchez, Mississippi, where she died on July 6, 1820. During her life she wrote more than 2000 letters, beginning at age fourteen, which are an important record of her life and times, including meeting President and Mrs. Washington, and exploring such issues as education reform and the independence of women. Murray was an important figure in setting a precedent for nineteenth century feminists to become outspoken advocates of equality.

The Biography of John Murray

The Autobiography of John Murray