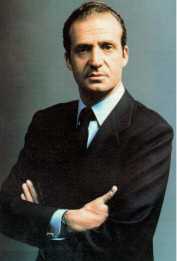 Juan Carlos de Borbon y Borbon was born on January 5, 1938, in Robe. At the express wish of his father, he was educated in Spain. In 1962, he married Princess Sofia of Greece. The Prince and Princess went to live at the Palacio de la Zarzuela, on the outskirts of Madrid, which is still their residence.

After his designation as future successor to the Head of State in 1969, he embarked on a series of official activities, touring Spain and visiting many foreign countries, including France, the Federal Republic of Germany, the United States, Japan, China and India.

On the death of the previous Head of State, Francisco Franco, Juan Carlos was proclaimed King on November 22, 1975. In his first message to the nation he expressed the basic ideas of his reign, to restore democracy and become King of all Spaniards, without exception.

The Constitution establishes as the form of government of the Spanish State that of a parliamentary monarchy, in which the King is the arbiter and overseer of the proper working of the institutions. By giving the royal assent to this Constitution, King Juan Carlos expressly proclaimed his firm intention to abide by it and serve it. In fact, it was the actions of the Monarch that saved the Constitution and democracy during the night of February 23, 1981, when the constitutional powers had been retained the Parliament building in an attempted coup.

The King has encouraged a new style in conducting relations with Latin America, emphasizing the identifying features of a cultural community based on a common language, and pointing to the need to generate common initiatives and take part in suitable kinds of cooperative activity. The countries of that area have shown great generosity in agreeing on the need to create a permanent framework capable of expressing this new situation, setting objectives and organizing programs and specific lines of action. This is the rationale behind the Latin American Conferences, the first of which was held in Guadalajara, Mexico, in 1991.

King Juan Carlos, who pays constant attention to the world of intellectual developments and its capacity for innovation, has a special relationship with universities both at home and abroad.

As a keep practitioner of several sports, such as skiing and sailing, Juan Carlos supports and appreciates sport as a formative influence of unquestionable social value. The presence of the King and Queen and their encouragement of the Spanish Olympic teams during the Games in Barcelona in 1993 attest to the importance which Juan Carlos attaches to this activity.

King Juan Carlos I is a direct descendant of many famous European rulers, such as Holy Roman Emperor Charles V (who as Carlos I of Aragon and Castile is said to have been the first King of Spain), King Louis XIV of France and Queen Victoria of the United Kingdom. Therefore, he is related to all the current monarchs of Europe.