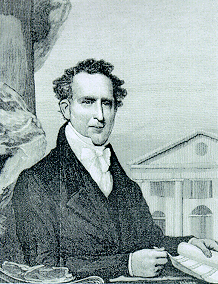 Josiah Quincy (1772-1864) was President of Harvard University from January 29, 1829 to August 27, 1845. He was also a politician, serving as a Federalist congressman, Boston mayor, Massachusetts municipal court judge, and Massachusetts state representative and state senator.

Josiah Quincy was born to Josiah Quincy Jr. and Abigail (Phillips) Quincy on February 4, 1772, in Boston, Massachusetts. Quincy was born into a wealthy family whose members were judges, elected representatives, and militia officers. Quincy’s father was a lawyer and revolutionary war pamphleteer. When Quincy’s father died in 1775, he was raised by his mother and grandfather, Colonel Josiah Quincy. At the age of six, Quincy was sent to study at the Phillips Academy in Andover, Massachusetts under the tutelage of his uncle, the Reverend Samuel Phillips. Quincy followed in the footsteps of many family members when he chose to pursue his college studies at Harvard University. After graduating (A.B. 1790, A.M. 1793) Quincy entered upon a legal apprecenticeship and was admitted to the Massachusetts Bar. Nevertheless, Quincy decided to pursue a political career and never seriously practiced law.

Quincy was elected to the Boston Town Committee in 1795. An ardent Federalist, he ran for the United States Congress in 1800 but was defeated. In 1804 he was elected to the Massachusetts State Senate and ran for Congress again in the Ninth Congressional district. Winning election to Congress, Quincy spent the next eight years in Washington, D.C. Known as a “ranting Federal spouter,” Quincy’s congressional career was disappointing. The Republican Party led by Thomas Jefferson and James Madison were in the ascendancy and the Federalist party was in its decline. During his career in Congress, Quincy was constantly challenging the Republican administration but without much effect. He left Congress in 1813 after voting against war with Great Britain.

Returning to political life in Massachusetts, Quincy was elected to the State Senate in 1813, serving until 1820. He continued his opposition to the War of 1812, opposed slavery, and spoke out against the domination of the government by the “slave power.” He was a delegate to the Massachusetts Constitutional Convention in 1820, became a member of the Massachusetts House of Representatives in 1821, and served as a judge on the Municipal Court of Boston.

Quincy’s greatest impact as a public servant was as mayor of Boston from 1823 to 1828. During his administration, Quincy strengthened and centralized the authority of the mayor’s office and professionalized and modernized employment practices in the newly incorporated city. His accomplishments included the regularization of garbage removal, the creation of a professional fire department, the introduction of municipal water and sewer systems, the opening of the House of Industry, Correction, and Juvenile Reform to replace out-of-door relief, and the establishment of a Department for the Correction and Reformation for Juvenile Offenders which instructed troublesome youth in appropriate manners. Quincy attacked the breeding places of crime by revoking liquor licenses and by enforcing the laws against gambling and prostitution. At times he led volunteers on raids of the city’s criminal areas. Finally, Quincy initiated one of the first urban renewal projects in the country. He tore down a nest of tenements on the water front, constructed six wide streets, and filled in the tidal flats. This area later became known as Quincy Market, adjacent to Faneuil Hall. 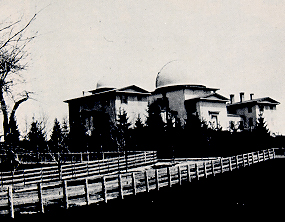 Quincy left Boston the cleanest, most orderly, and best governed city in the United States. He became known as “The Great Mayor.” Quincy’s various projects, however, came with a large price tag, and he left the city the most indebted in the United States. This was the primary reason that he was denied reelection in 1828.

Josiah Quincy became the first layman since John Leverett to assume the presidency of Harvard University. His administration began after the resignation of John T. Kirkland on June 15, 1829. Known to be an administrator rather than an educator, Quincy met the Harvard Corporation’s desire for someone with practical administrative experience.

One of Quincy’s major challenges as president was the taming of the perennial student rebellions. Immediately after his election as president, Quincy informed the student body that the campus would no longer be a haven for lawbreakers. He challenged the students to improve their behavior and in doing so became most unpopular. Students continued to riot and burned Quincy in effigy in the College Yard. In 1834, after an open rebellion among college freshmen spread to other classes, Quincy suspended the entire sophomore class. Later on, with only the support of Corporation Fellows Nathaniel Bowditch and ex-President John Quincy Adams, Quincy faced down a threatened boycott of commencement exercises by the senior class. When the appointed day arrived, most seniors took their degrees. Further trouble erupted in 1841 when Quincy declared that public authorities would be brought onto the campus to deal with troublemakers. Rebellion broke loose on campus and an explosion occurred in the college chapel. When the smoke cleared, a note was visible on the wall, “A bone for old Quin to pick.” Despite his best efforts, Quincy was never able to deal effectively with the student unrest. 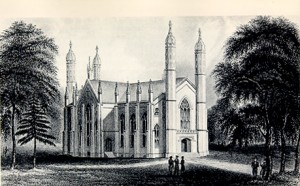 Quincy also spent a great deal of effort reforming the college curriculum. Under his administration, course instruction was expanded to make room for classes in science, history, and English literature. He allowed for a greater choice by students in the selection of subjects and instituted a mathematical grading system to standardize grades.

During Quincy’s administration, the Law School became an academically oriented professional school. Gore Hall (1841) was opened, housing what was then the largest and most valuable collection of books and maps in the United States. Finally, Quincy launched a public subscription to provide for the first research unit at the University, the Astronomical Observatory.

1836 Procession from the Meeting House
celebrating the Harvard Bicentennial. 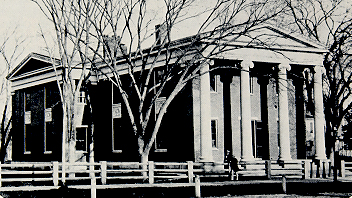 After his retirement, Quincy lived another two decades. Influenced by the activities of his sons, Josiah Jr. and Edmund, Quincy became interested in politics again. Josiah Jr. followed in his father’s footsteps and became the mayor of Boston. Edmund’s abolitionist politics drew Quincy into the antislavery movement. At the age of 82, Quincy began writing political pamphlets denouncing the “slave power” and the Fugitive Slave Law. He became a firm supporter of Abraham Lincoln in 1860 and a Unionist after the beginning of the Civil War.

Writing history had always been of interest to Quincy. Prior to his retirement he had completed the History of Harvard University (1836). During the research for this book, Quincy had discovered in the college records the first rough sketch of the college coat of arms, VERITAS, drawn on three books. The announcement of this fact was made at the school’s bicentennial celebration, and in 1843 the design was adopted by the Harvard Corporation as its official seal. In retirement Quincy continued to write, concentrating on Boston and Massachusetts history. He wrote the Journals of Mayor Samuel Shaw (1847), A History of the Boston Athenaeum (1851), A Municipal History of Boston (1852), and Memoir of the Life of John Quincy Adams (1858). 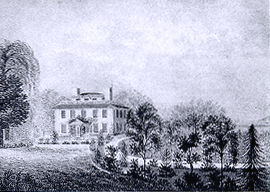 A public servant, Josiah Quincy played an important role as a city reformer and school administrator. Quincy died on July 1, 1864, and was buried in Mount Auburn Cemetery in Cambridge, Massachusetts.

–From The Papers of Josiah Quincy, Harvard University 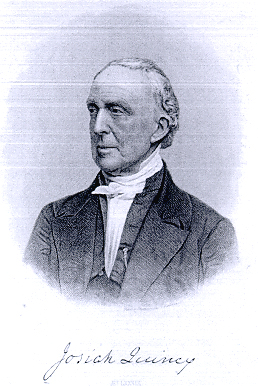 He was a Christian, and a Unitarian Christian; a consistent and exemplary member of the old church in Federal Street, now removed to Arlington Street, in Boston, successively under the pastoral care of Dr. Channing, the joint pastorate of Drs. Channing and Gannett, and, to Mr. Quincy’s death, of the latter. During his summers, passed since his retirement from public life at Quincy, where he made his old ancestral grounds the theatre of large, and in many points, valuable agricultural experiments, he was faithful a worshipper at the Adams Temple.

The funeral of Hon. Josiah Quincy took place from the Unitarian Church on Arlington Street. 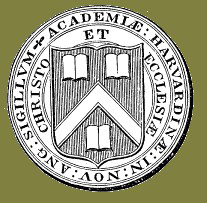 When Josiah Quincy was president of Harvard University, says the Christian Register, his son was president of the common council of Boston. At a social gathering they were toasted as “the two President Quincys.” The younger Quincy arose first to reply seriously, even solemnly. He said: “I wish to be courteous, but I cannot submit to anything derogatory to my own dignity. You have been pleased to allude to two President Quincys. I beg you will bear in mind that the old gentleman at the head of the table presides only over a parcel of beardless boys, while I preside over a body of grand and influential men.” Then the roar went up.

Mayor Quincy and the Market

Josiah Quincy (1772-1864) served eight years in Congress. A stubborn spokesman for his class and region, he never abandoned his efforts to defeat “that snake in the grass,” Thomas Jefferson. Once, Quincy tried to impeach Jefferson single-handedly. (The vote was 171 to 1.) A frustrated man, he left Washington for Boston early in 1813, at age 41. After several years in the state legislature, where he became Speaker of the House, he turned his vigor and intense devotion to public service for Boston itself, first as municipal judge and then as mayor.

When Boston was incorporated as a city in 1822, the first mayoral election produced a deadlock between Josiah Quincy and Harrison Gray Otis, and the gentlemanly and diffident John Phillips became the compromise candidate who headed the city that year. Then Josiah Quincy took over. He was elected to six one-year terms as Mayor of Boston, from 1823 to 1828. The original city charter gave the mayor little power. But Quincy was determined to “take the laboring oar into his own hand” and, since committees of the Board of Aldermen had the real power, he placed himself at the head of every important committee of that body. Josiah Quincy was a Federalist and, therefore, a conservative. But he became a progressive in local politics, one of the first municipal reformers in the history of the country, and it is he who is known as “The Great Mayor.” Quincy started his working day by surveying the city on horseback. Nothing escaped his notice, including the horse manure.

Even though Faneuil Hall had been enlarged in 1806 (with money from a lottery) the city needed a more adequate food and produce distribution center to supply the needs of the growing city (pop: 50,000). To remedy this crowded, filthy situation, Quincy produced a plan for some new stores and a market house, originally planned as a wooden imitation of the open air market in Philadelphia. It was denounced as an impractical scheme, a “mammoth project of the mayor” that would lay the foundations of a city debt “which neither the present inhabitants of Boston, nor their posterity, would be able to pay.” One writer to the Boston Patriot took the city to task for proposing such a sprawling central market which would put the neighborhood grocer out of business.

But Quincy pressed on and got his market. Eventually the Faneuil Hall Committee decided that the new market should be enclosed and built of stone, instead of wood. The cornerstone was laid on April 27, 1825, and the following year the first customer bought his leg of lamb.