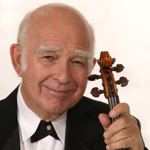 Violinist and conductor Joseph Silverstein, widely regarded as one of Boston’s most influential musical citizen while serving as concertmaster and assistant conductor of the Boston Symphony Orchestra, has been appointed Principal Conductor and Artistic Advisor of the orchestras at New England Conservatory. Awarded an honorary doctorate by NEC in 1986, Silverstein, 73, is currently Principal Guest Conductor of Seattle’s Northwest Chamber Orchestra and Conductor Laureate of the Utah Symphony.

Silverstein, who joined the BSO in 1955, became concertmaster in 1962. He was named assistant conductor in 1971. In 1983, he left Boston to become Music Director of the Utah Symphony. He held that position until 1998 when he was named Conductor Laureate. During his tenure in Boston, Silverstein conducted the BSO on more than 100 occasions. He also appeared frequently as a soloist, performing the Elgar, Barber, and other concerts. His Telarc recordings of Vivaldi’s Four Seasons with the BSO received a Grammy nomination.

—From the New England Conservatory