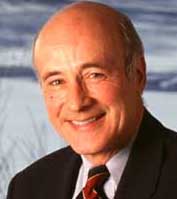 Joseph Nye was Dean of the John F. Kennedy School of Government at Harvard University from 1995 to 2004. He joined the Harvard faculty in 1964 as Director of the Center for International Affairs and Associate Dean of Arts and Sciences.

From 1977 to 1979, Mr. Nye was Deputy to the Under Secretary of State for Security Assistance, Science and Technology. He also chaired the National Security Council Group on Nonproliferation of Nuclear Weapons.

In 1993 and 1994, he was chairman of the National Intelligence Council, which coordinates intelligence estimates for the President of the United States. In 1994 and 1995, Mr. Nye served as Assistant Secretary of Defense for International Security Affairs.

His most recent books are: Bound to Lead: The Changing Nature of American Power (1990), Understanding International Conflicts: An Introduction to Theory and History (2002), The Paradox of American Power: Why the World’s Only Superpower Can’t Go It Alone (2002) and Soft Power: The Means to Success in World Politics (2004).

—Courtesy of The Globalist

Click here for supplemental reading about Joseph Nye on Amazon.