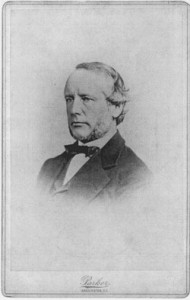 Joseph Henry Allen was sixth in descent from James Allen, who came from England to Dedham, with his wife Anna, in 1639. Ten years later the western part of Dedham was set off under the name of Medfield; and James Allen was one of a company of fifty to settle there, receiving as his portion a house-lot of twenty-four acres, which has remained in the Allen family ever since. In this homestead, Joseph, father of Joseph Henry, was born, August 15, 1790. He graduated from Harvard College in 1811, and was ordained in Northboro, Massachusetts, October 30, 1816, and served that parish until his death in 1873. In 1818 he married Lucy Clark Ware, daughter of Rev. Henry Ware, whose appointment as Hollis Professor of Divinity in 1805 first decided the dominance of liberal sentiment in the councils of Harvard College.

Joseph Henry Allen was born in the Northboro parsonage, August 21, 1820, the second of seven children, and received his preparatory education wholly in the noted family school which his father carried on for many years under his own roof. Entering Harvard College at the age of sixteen, he graduated in 1840, as third scholar of his class, and with high reputation for character, for scholarship, and for genial social qualities. He seems to have had the ministry in view from an early time, and entered at once upon his theological studies, graduating from the Divinity School in 1843. In October of that year he was ordained over the Third Parish of Roxbury, since known as the First Congregational Society of Jamaica Plain. Here he remained four years, breaking himself with great assiduity and fidelity into the routine work of the ministry. For this calling he had inherited instincts and the best moral and intellectual qualifications, together with a native simplicity of manner of unfailing charm for those who knew him well; while, on the other hand, his meditative turn of mind had to be fought against, and cost him evidently much effort in adjusting himself to the social demands of a parish. No pastor, however, could be more devoted than he, or more alive to the higher significance of the ministry; and his four years of professional apprenticeship at Jamaica Plain left only friendly memories behind. In 1847 he took charge of the Unitarian church in Washington, D.C., where he remained till October, 1850, coming into contact necessarily with many public men, and interesting himself deeply in the national questions of the hour. In this atmosphere, so often destructive to high ideals, Mr. Allen matured the generous political convictions to which he adhered so steadily through life. This was the early period of the great anti-slavery conflict, when timidity reigned supreme in both political parties, and Northern pulpits, as a rule, were closed to all discussion of the dreaded theme. Mr. Allen, while the least aggressive of preachers, and led by the habits of his mind to look at even the slavery question on all its sides, left no doubt as to his own position, giving his voice for freedom when it cost him most. A personal reminiscence is in place here, taken from the lips of one who, in 1840 or thereabouts, found herself for the first time in an anti-slavery gathering in Boston, at the moment when a bitter attack was made upon the New England pulpits as recreant to their historic trust. To the end of a long life this interested but somewhat conservative listener retained a vivid recollection of a young minister leaping to his feet, and in a few passionate and very eloquent words declaring that the younger Unitarian clergy would never forsake the cause of the slave. This was Joseph Allen, whose later professional career fully bore out that ardent pledge.

In 1850 he succeeded Dr. Hedge in charge of the important pulpit at Bangor, Maine The high standard of scholarship and thought established there by Dr. Hedge was amply sustained by his successor; but the times were growing more and more disturbed, the parish was a conservative one, and it became slowly evident that the pulpit was not the best sphere for a man of Mr. Allen’s temperament. While the few always found him a preacher of choice diction and rare spiritual insights, his habit of intense absorption in the intellectual interest of the moment and a certain air of mental detachment gave his sermons too much the character of monologue for the many, who are not scholars or followers of consecutive thought. Whatever subject engaged him, whether in conversation or in preaching, was approached in the tentative attitude of the investigator bound to see and state the whole rather than of the advocate urging his dogma home; and, as the average congregation yearns for positive assertion, he labored at a disadvantage against others of far less broad or penetrating vision. It should be said, however, that his love for his profession never flagged, and that his later preaching, in various pulpits, gained steadily in power, and held to the end its charm for thoughtful minds.

In 1857 Mr. Allen returned to Jamaica Plain, busying himself for a time in teaching, a calling which he pursued in Northboro and West Newton from 1863 to 1866. At the same time he lent his facile pen to much literary work. Those who remember the Christian Examiner, a periodical of limited circulation, but representing the best theological and literary temper of the last generation, look back upon Mr. Allen’s editorship, in connection with Thomas B. Fox, Dr. Hedge, and Dr. Bellows, as the period of its widest range and ablest critical scholarship. For several years the department of book reviews was entirely in his hands, and received a distinctly attractive and unique character. In later years he did equally useful work in connection with the Unitarian Review.

His independent literary work began in 1849 with his “Ten Discourses on Orthodoxy,” a clear and logical statement, much needed then, of the hard and fast series of dogmas to which Calvinism in its unadulterated form holds its disciples. In 1861 this was followed by “Hebrew Men and Times,” the first adequate presentation in these parts of the critical investigations to which the Old Testament had been so long subjected in Germany. For the hour it was an illuminating sketch of a dimly understood page of religious history.

In 1866 Mr. Allen established himself in Cambridge, where for the rest of his life he found a congenial home, accepting whatever literary work came to hand, and never so happy as when digging deepest or searching widest among first-hand sources for historical material. In this interval appeared various manuals which have made his name familiar in our preparatory schools for a generation, and still testify to the thoroughness of his classical scholarship.

In 1878, on the recommendation of Dr. Hedge, then retiring from his lectureship in the Divinity School, Mr. Allen was appointed his successor as Lecturer on Ecclesiastical History until a permanent professorship should be established. He held the position until 1882, entering upon the task, a veteran of nearly threescore, with the enthusiasm of full-blooded youth, and with knowledge of the subject and habits of research which few of his contemporaries possessed. His four years were eminently happy, and the results appear in the three volumes of his Christian History in Its Three Great Periods, one of the noblest products of Unitarian scholarship. They present not so much a continuous history of Christianity as a series of monographs upon the separate epochs which, to Mr. Allen, marked the grand movements of Christian thought. His mind was most at home in this profound study of single periods, showing their historical significance with unerring vision and quick recognition of spiritual worth, whether in Protestant or in Catholic fields, while leaving to the reader the final work of coordinating these brilliant fragments in a complete survey. If this method lacks incisiveness or the positive leadership of opinion which the student craves, it gives, on the other hand, a scholarly appreciation of varied forms of excellence as rare in ecclesiastical literature as it is stimulating. The chapters in Volume 3. on “The Puritan Commonwealth,” on “Speculative Theology,” and on “The Reign of Law,” show Mr. Allen’s learning and mental range at their best. Though one of his friendliest critics has charged him with indifference to philosophy, yet one might look far to find so luminous a survey of the successive schools of German, French, and English speculation as are presented here, or healthier reading for the young student puzzled by the metaphysical theories of the hour, than in these closing pages on “The Reign of Law.”

Through this whole period, Mr. Allen kept his hold upon the pulpit, preaching with great acceptance to various pastorless congregations, and welcomed in many homes for his genial companionship and the wealth of his conversational lore. In Ann Arbor in 1878-1883, and in Ithaca in 1882-83, he found student listeners to whom it was a rare delight for him to minister; and in 1884 he gave his services to the parish at San Diego, California. In 1879 all lovers of pure scholarship were gratified when Harvard College bestowed upon him the well-earned title of D.D., which stamped his life-work with fitting academic distinction.

To this picture of a busy life, a thirst unceasingly for useful occupation, it would be pleasant to add some idea of the delightful personal traits which made his companionship and especially his domestic life so attractive. His marriage to Anna Minot Weld, of Jamaica Plain, May 22, 1845, proved an eminently happy one, and brought to his side three sons and three daughters, all of whom, except one daughter, survived him. Their home was the center of tenderness and good will, with a pervading simplicity which seemed to bid all welcome. His vast fund of general knowledge was open freely to every comer, and in general conversation he seemed an exhaustless reservoir to be drawn upon at will. He kept in touch also with eminent writers of other lands, carrying on with Martineau, F. W. Newman, and others a correspondence alive not to religious interests alone, but to the literary and political concerns of both continents. Thanks to his simple and sturdy habits, his working powers never failed him; and his abounding intellectual activity was happily unbroken to the very end of a long and useful life. He died at his home in Cambridge, March 20, 1898.

“On Some Results of the Voluntary System,” by Joseph Henry Allen