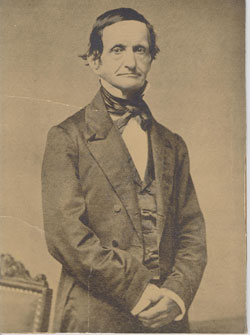 Joseph Allen was the son of Deacon Phineas and Ruth (Smith) Allen, and was born at Medfield, Massachusetts, August 15, 1790. He prepared for college under the care of the Rev. Dr. Prentiss, the minister of Medfield, and graduated at Harvard in the class of 1811. He then began the study of theology under the direction of the Rev. Henry Ware. He received approbation to preach from the Boston Association of Ministers in the autumn of 1814, and preached his first sermon in October of that year. After supplying pulpits in Salem, Dorchester, and Lexington, and spending nearly a year in West Boylston, he was settled at Northboro on October 30, 1816. He was ordained as minister of the town, and retained that office until his death. For the last sixteen years of his life he was for the greater part of the time provided with a colleague.

Mr. Allen was married February 3, 1818, to Lucy Clark Ware, eldest daughter of Dr. Henry Ware, and they had seven children. Two of his sons, Joseph Henry and Thomas Prentiss, entered the Unitarian ministry, and another, William Francis, was a distinguished professor in the University of Wisconsin.

In 1848 Harvard College gave to Mr. Allen the honorary degree of Doctor of Divinity, and in the following year he went to Paris as a delegate to the Peace Congress, availing himself of the opportunity to visit places of interest in Europe. On his return he spoke repeatedly upon peace questions.

During a considerable portion of his ministry Dr. Allen received boys into his family to prepare them for college, and many young men who afterwards proved serviceable in public life enjoyed his instructions. After retiring from the active duties of the ministry, he continued a useful citizen of Northboro, and found pleasant employment in his study, his garden, and in superintending the schools of the town.

Dr. Allen’s pastorate of fifty-six years was a memorable one. A whole town was interpenetrated by his influence. His clear judgment, his wise counsels, his Christian benignity, his broad sympathies, his catholic spirit, his interest in the young, which never grew cold because his own heart was always youthful, made his friendship to be widely sought and highly prized. As a preacher, he was never eloquent in the popular sense of the word, but sensible and fervent, while his force of character made his words impressive and rendered his ministry one of the most successful and blessed for its abiding influence and hallowed memories. His long pastorate included the time of sharp division between the Calvinistic and liberal parties in New England. Dr. Allen was a most outspoken Unitarian, but his abounding charity and his reputation for conscientious fidelity won him the deep respect of the men of all denominations. For many years he was the Nestor and president of the Worcester Association of Ministers. In his old age he published the History of the Worcester Association. This was a work of loving remembrance of his associates and brethren in the ministry, and its preparation revived some of the sweetest memories of his life. It is an invaluable contribution to local ecclesiastical history and biography.

Dr. Allen was happy in his death as in his life. He died suddenly on February 23, 1873, before his step was weak or his eye grown dim.

Dr. Allen was a minister of the old New England type, and almost the last example in Massachusetts. The Rev. William J. Potter, of New Bedford, wrote of him, “Such devoted life-pastorates as his, and such well-equipped ministerial minds, wise and benevolent, self-sustained, yet self-sacrificing, constituted one of the powerful factors in making our New England what it has been in itself and in its influence on the country at large.”

On the memorial tablet in the church in Northboro is written:

JOSEPH ALLEN
1790-1873
Ordained as minister of this town
October 30, 1816
For fifty-six years pastor of this church
A faithful counselor, a wise instructor
A leader in the work of public education
A helper to many in times of need
A lover of flowers and of little children