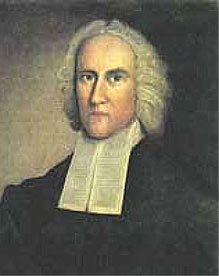 This unforgettable minister and philosophical theologian is best known for his single sermon describing God’s wrath: “Sinners in the Hands of an Angry God.” In this notable sermon, Edwards preached that the sinner was held tenuously over the abyss of hell like a spider on a web. Revulsion against his preaching and writing long promoted the advance of Unitarianism.

Jonathan Edwards was a pivotal American Calvinist who described, criticized, and promoted religious revivals, since he thought they might signal the coming of the millennium.

A whole library of volumes written by and about Edwards continue to be published anew. He was frequently afflicted with illnesses such as depression, likely allied with social rejection.