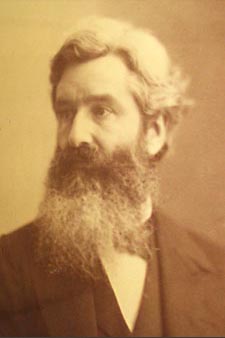 Born in Boston on June 28, 1818, John Weiss attended the Chauncy Hill School, and later the Framingham Academy. He graduated from Harvard College in 1837, and taught school for a few years in Jamaica Plain, Massachusetts before attending Harvard Divinity School. Later on in his life he commented on the quality of learning he perceived that went on there, when he said, “Time was that when the brains was out a man would die, but now they make a Unitarian minister of him.” During his ministerial training he spent several months at Heidelberg University, which furthered his expertise in German philosophy. His sharp intellect was also nurtured by a Jewish background. He was ordained in Watertown, Massachusetts on October 25, 1843, where he was settled twice, 1843-47 and then 1862-69. During his first ministry in Watertown he was an outspoken advocate of anti-slavery opinions, and even resigned once from his pastorate over these views, only to be convinced to return by his parishioners. In 1847 he was called to the church in New Bedford, Massachusetts, where he served for 11 years. When he returned to Watertown, he was active on the school committee, and was one of the founders of the public library, being the first chairman of its founding board of trustees.

Weiss was one of the first religious thinkers whose views were purely natural and scientific, but he had a difficult time making his views accessible to any but the most erudite, and thus never achieved great success on the lecture circuit. He was one of a group of radical theists who rejected Christian traditions, calling himself a theistic naturalist. This led him to membership in a conversation group called The Radical Club, and eventually to being one of the founders of the Free Religious Association (FRA) in 1867. Despite his unorthodox views, Weiss retained his Unitarian affiliation, and served as a director for the American Unitarian Association (AUA) when others were calling for complete withdrawal from the movement. Despite his loyalty, Weiss felt there was a tendency in Unitarianism to be altogether too slow in adopting more liberal views. His biographer Minot Savage agreed with Weiss that the old radicals had been sacrificed so that their doctrines could be safely preached, “The process of killing them off had opened the eyes and broadened the minds of the community, and so I was enjoying a freedom which their martyrdom had purchased.” (M. J. Savage in Eliot, Heralds, III, p. 378-79, see in context below) During his life he published many volumes of theology and history, including a biography of Theodore Parker. Remembered for his nervous energy and wit, his classmate Octavius Brooks Frothingham said of Weiss, “This man was a flame of fire. He was genius, unalloyed by terrestrial consideration; a spirit-lamp, always burning.” 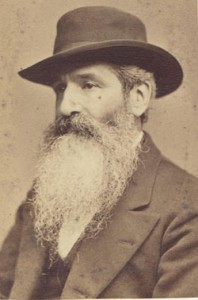 A human personality is a most complex, elusive, and baffling thing. To catch it with a definition, to comprehend it at all adequately, to convey to others the small measure of even your own comprehension—this is next to impossible. This is true concerning those with whom one is in daily contact, with whom one is “well acquainted,” as we say. How much more, then, is it true of a man who, however well known in his day, has now become a “tradition,” of whom no adequate records have been kept!

He graduated at Harvard in 1837, and from the Divinity School in 1843. He was ordained minister of the First Parish in Watertown on October 25, 1843, and served four years. Then for eleven years he was minister of the church in New Bedford, and in 1862 returned to the charge of the church in Watertown. After his resignation in 1868 he preached only occasionally until his death in Boston, March 9, 1879.

Weiss was a preacher first and always. But he was also lecturer, essayist, Browning scholar, reader and commentator, biographer, conversationalist and wit. The Life of Theodore Parker, American Religion, Wit, Humor, and Shakespeare, The Immortal Life,—these titles indicate the range of his published work. As a preacher, he was brilliant, epigrammatic, and a little “caviar to the general.” Those who liked him at all liked him very much indeed. They clung to him, would follow him from place to place, and put themselves out to any extent for the sake of listening to their favorite. He would not slight the service, but loved to read the hymns all through—a fine custom for those (a few) who know how to read a hymn. He hated to have the service disturbed by those who have not religion enough either to stay away or else be decently on time. Weiss would stop in the service and sit down, when he saw the laggards coming in.

He was singularly alert, open-eyed, and fearless. Being such, he was always one of the first to accept and give voice to whatever he was persuaded was a new truth. In his day this naturally made him one of those labelled “radical.” He was one of the small and brilliant group of those best known as “Free Religionists.” Lyman Abbott said to me not long ago, concerning the split between Orthodox and Unitarian, “If it was to be done now, it wouldn’t be done.”

So we may say as to the Free Religious controversy. Some of us who knew Frothingham and Abbot and Johnson and Longfellow and Weiss may find in this knowledge a little compensation for being old enough to have had the experience.

Out of this controversy grew the Radical Club, which met—a veritable salon—at Mrs. Sargent’s on Chestnut Street. Weiss was one of the brightest shining stars in this constellation. Here his repartee, his wit, his powers as a talker, his sarcasm, found free scope.

It is hard for the young men of to-day to appreciate what it cost to be free in those days. To those who do appreciate, it does not seem strange that a little bitterness was sometimes developed. One touch of Weiss’s sarcasm may illustrate this bitterness. Yet it ought to be remembered in his case that it was more wit than bitterness. The wit was permanent, the bitterness only transient. In one of his Free Religious addresses he cried out, “Time was that when the brain was out a man would die, but now they make a Unitarian minister of him.”

Another anecdote will better reveal the real feeling of the man. After he had ceased regularly to occupy a pulpit, he lived for some time on West Brookline Street, near Washington Street. I was then on West Newton Street, away from him only the width of Blackstone Square. I met him one day on the sidewalk. He stopped, and said: “Savage, you ought to be grateful to some of us fellows. We have been killed to make way for you.”

This, alas! was bitterly true. I was then preaching as radical doctrine as he had ever uttered, or any of his compeers. The process of killing them had opened the eyes and broadened the minds of the community, and so I was enjoying a freedom which their martyrdom had purchased. There was no apparent bitterness in his words, but rather a whimsical and humorous, albeit pathetic recognition of the same characteristics of human nature of which Jesus spoke when he talked of slain prophets and sepulchres built by the children of the slayers.

I often called on Weiss, and talked over world conditions. He was a charming companion and delightful talker. I do not think he ever grew old. One of his chief characteristics—as he impressed me—was a certain boyishness. With this was mingled something prankish, almost elfish. There was a subtle, mystic quality about him which gave him a personal fascination and charm.

A friend has sent me a little story of his boyhood, the remembrance of which must have immensely tickled his own exuberant sense of humor. He was out with some boys one day, when they came to a yard in which were some fine cherrytrees, loaded with fruit in just the proper condition to appeal to a boy. The cherries were hidden behind a close and high board fence. Since the days of Eve, however, obstacles in the way of fruit have been only added incitement to a boy. The natural suggestion was made that they scale the fence and appropriate the cherries. What boy, with a healthy appetite, ever understands the nature and crime of theft in presence of an orchard? But young Weiss was like John Gilpin—”Though on pleasure bent, he had a frugal mind.” He took the precaution to peep through a knot-hole, and so discovered the owner of the cherries close by. So in a virtuous and loud voice he declared the other boys might do as they pleased, but he wasn’t going to steal a man’s cherries. And he started for home. Soon after his arrival his “virtue” found “its own reward” in a big basket of the coveted fruit which the owner sent to him as the good boy who was superior to temptation!

— By Minot J. Savage, from Heralds of a Liberal Faith, Vol. III, edited by Eliot.