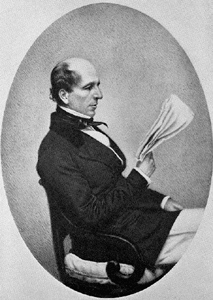 Born in Bordeaux, France, and raised in Milton, Massachusetts, John faced his father’s death when he was six. At the age of twelve he entered the family business–a clerk in the China counting-house of his uncles. Five years later he “shipped before the mast” to Canton, replacing his brother Tom, who died while serving as an agent for Houqua, China’s leading export merchant. By learning quickly and acquiring an early fortune, he returned home and married, but soon sailed back alone to China, in three years gaining what was then great wealth, $100,000.

Upon returning to the United States, John Forbes left the volatile China trade and invested in land, iron, and railroads. While actively participating in the Saturday Club with Boston Unitarians notable in science, religion, philosophy, and literature, Forbes was president of the Chicago Central Railroad, which pioneered the first trains from the East to Chicago. Throughout half a century of investing in the consolidation of railroad development opening the West, he led in the creation of the newly industrializing nation’s very first big business. He is recognized as a pioneering precursor of Henry Ford a century later.

John Murray Forbes, long admired by many for his personal integrity, contributed to American society through endorsing Wendell Phillips, providing weapons to fight slavery, and entertaining John Brown. In addition to providing wartime counsel to President Lincoln and his cabinet, Forbes was sent on a secret mission to England which prevented the Confederacy from securing two ironclad ships. Among his various other philanthropies were his help in building the Massachusetts Institute of Technology as well as the Tuskegee and Hampton Schools, and his lead in fostering the Robert Gould Shaw monument on the Boston Common just across from the Unitarian Universalist Association on Beacon Street.