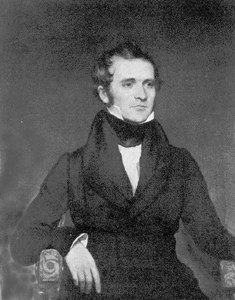 From The Lowells and Their Seven Worlds by Ferris Greenslet (The Riverside Press, 1946).

Francis Cabot Lowell, John’s father, was the founder of cotton manufacturing in the United States. The Boston Manufacturing Company is considered the first large American manufacturing corporation, a prototype.

John was a sickly child who was not happy at Harvard, so he left after two years to travel to Indonesia and India. Upon returning, he worked with his father, helping to finance the construction of huge cotton mills, as well as one of America’s first railroads, the Boston and Lowell Line.

In 1830–1831 John Lowell lost both his wife and two daughters due to scarlet fever. When he decided he would circle the earth, he sold his properties in order to establish an institute for popular education by offering lectures or courses for the public either free or with nominal charge. After two years of visiting Europe, he and a companion went to Egypt, where he suffered various illnesses before taking an utterly exhausting journey by camel across the desert. Although he was able to take a ship to India, he died three weeks after arriving in Bombay.

Immediately upon opening in 1838, the Lowell Institute—operated by the family with a single trustee—flourished. Thanks to the wise investment of the initial endowment of $250,000, the institute now cosponsors free public lectures, national weekly public radio broadcasts, international webcasts of the WGBH Forum Network, university extension courses at Harvard, and the cultural treasures of public television broadcasts via the WGBH Educational Foundation.