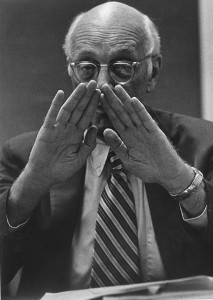 Fairbank recalled later that “China appealed to me at age twenty-two as something interesting that no one else seemed to be doing.” Five years in China showed him that behind every specialized historical topic lay a broader challenge: understanding the immense differences between Chinese civilization and our own. That broader challenge would dominate his life.

In 1936 Fairbank returned from China with his wife, Wilma D. Cannon (Radcliffe, 1931), whom he had married in Peiping and who lent her artist’s sensibility to their joint exploration of Chinese life. Harvard appointed him instructor in History, and he set about building a modern China program. For undergraduates, Fairbank and Edwin O. Reischauer offered “The History of East Asian Civilization,” quickly dubbed “Rice Paddies,” which became the Harvard students’ port of entry into China and Japan.

During World War Two, US government service in China quickened Fairbank’s sense of mission. In Chungking, he was struck by the declining morale of the Nationalist government, and horrified by the grim lives of his old Peiping friends in their West China refuge. There began two lifelong commitments: to supporting liberal Chinese academics, morally and materially; and to warning Americans about China’s catastrophe. He gradually realized that if the United States remained tied to the inept and corrupt Nationalist regime, Sino-American common ground would shrink to nothing.

Back to Harvard after the war as Professor of History, Fairbank spoke beyond Harvard Yard to the American public. China’s revolution, he insisted, was home-grown, “not only genuinely Communist but genuinely Chinese,” and that in any event there was nothing the US could do to stop it. Understanding Chinese history was the key to dealing with China as it really is, not as we might wish it to be.

He reserved his finest efforts, however, for training China specialists at Harvard and building the China field nationwide. Training scholars in a new field (which he once likened to making machine tools, but which he actually practiced as a form of gardening) required persistent cultivation of talent and liberal application of foundation funds. Fairbank was both warmhearted and hardheaded: he was extraordinarily kind to students and colleagues, yet maintained a relentless grip on the main task: building the field of China studies. Harvard’s East Asian Research Center, founded by him and named for him when he retired, set the standard for modern China scholarship. For colleagues worldwide, the center was a forum of understanding; for students, it was a beacon of professionalism.

His students were his most cherished scholarly achievement. His last book, written in frail health, was a superb synthesis of recent scholarship, fused onto his own vision of China’s past. This work he delivered to the Harvard Press on the morning of September 12, 1991, and that afternoon he was felled by his final heart attack. He died two days later, aged 84.