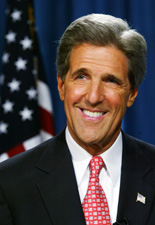 John Forbes Kerry, a Senator from Massachusetts, was born in Fitzsimons Army Hospital in Colorado on December 22, 1943. He graduated from St. Paul’s School in Concord, New Hampshire, in 1962 and graduated from Yale University in 1966. Kerry served in the United States Navy from 1966 to 1969, with service in Vietnam.

He graduated from Boston College Law School in 1976, was admitted to the Massachusetts bar in 1976, and commenced practice in 1976. Kerry was assistant district attorney of Middlesex County, Massachusetts, from 1977 to 1982 and lieutenant governor of Massachusetts from 1982 to 1984.

He was elected as a Democrat to the United States Senate in 1984, reelected in 1990, 1996, and again in 2002 for the term ending January 3, 2009. He has been the chair of the Democratic Senatorial Campaign Committee (One Hundredth Congress), of the Committee on Small Business and Entrepreneurship (One Hundred Seventh Congress, One Hundred Tenth Congress); and was Democratic candidate for U.S. president in 2004.

—From the Biographical Directory of the United States Congress