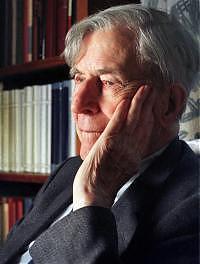 John Kenneth Galbraith was an influential Canadian-American economist of the 20th century. He was a Keynesian and an institutionalist, a leading proponent of U.S.-style, 20th-century political liberalism and progressive politics.

Galbraith was a prolific author, producing four dozen books. His most famous works were perhaps a popular trilogy of books on economics: American Capitalism (1952), The Affluent Society (1958), and The New Industrial State (1967). He taught at Harvard University for many years. Galbraith was also active in politics, serving in the administration of Franklin D. Roosevelt, Harry S. Truman, John F. Kennedy, and Lyndon B. Johnson; and serving as U.S. ambassador to India under Kennedy.

He was one of the few two-time recipients of the Presidential Medal of Freedom, receiving one from President Truman in 1946 and another from President Bill Clinton in 2000. He was also awarded the Padma Vibhushan, India’s second-highest civilian award, for his contributions to strengthening ties between India and the United States.

Galbraith was born to Canadians of Scottish descent. His father was a farmer and schoolteacher and his mother a political activist. In 1937, he became a United States citizen. Galbraith was a very tall man, at 6’ 9”.

Galbraith taught intermittently at Harvard in the period of 1934 to 1939. From 1939 to 1940, he taught at Princeton University. From 1943 until 1948, he served as editor of Fortune magazine. In 1949, he was appointed professor of economics at Harvard. During World War II, Galbraith was America’s “price czar,” charged with keeping inflation from crippling the war effort.

During his time as an advisor to President John F. Kennedy, Galbraith was appointed as U.S. ambassador to India from 1961 to 1962. There he became an intimate of Prime Minister Jawaharlal Nehru, and extensively advised the Indian government on economic matters. Although he was a former president of the American Economic Association, Galbraith was considered an iconoclast by many economists. This is because he rejected the technical analyses and mathematical models of neo-classical economics as being divorced from reality. Rather, following Thorstein Veblen, he worked as much in political economy as in classical economics.

American Capitalism: The Concept of Countervailing Power (1952) outlined how the American economy in the future would be managed by a triumvirate of big business, big labor, and an activist government. His most famous work, The Affluent Society, a bestseller, Galbraith outlined his view that to become successful, post-World War II America should make large investments in items such as highways and education using funds from general taxation. The New Industrial State (1967) argues that very few industries in the United States fit the model of perfect competition.

Galbraith’s 1981 memoir, A Life in Our Times, stimulated discussion of his thought, his life and times after his retirement from academic life. In 2004, the publication of an authorized biography, John Kenneth Galbraith: His Life, His Politics, His Economics by a friend and fellow progressive economist Richard Parker, renewed interest in his career and ideas.