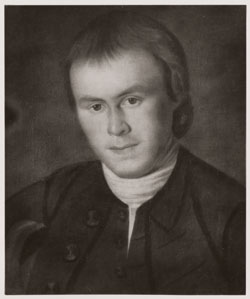 John Eliot was born in Boston, May 31, 1754. He was the fourth son and seventh child of the Rev. Andrew Eliot, D.D., and Elizabeth (Langdon), his wife. At the age of seven years he was placed at the North Grammar School in Boston, where in due time he was fitted for college. He was admitted a member of Harvard College in 1768, at the early age of fourteen, and graduated with the highest honor in 1772.

Soon after his graduation he took charge of a school in Roxbury, where he remained one year, and for several months of the succeeding winter he was employed in a similar way at Dedham. Some time during the second year after he graduated he returned to Cambridge to study theology, and continued there until the army took possession of the students’ rooms in the spring vacation of 1775. In consequence of some efforts that he made to recover the property in his room he was suspected of being a Tory. The fact that a considerable number of his friends were strongly in the royal interest, and that he was unwilling to abjure his social relations with them, was probably the real cause of his offending.

After being dislodged at Cambridge, he seems for nearly a year to have had no fixed residence. Part of the time he passed at Milton, and part at Braintree in the family of the Hon. Richard Cranch, for whom he always kept the most profound regard. He also paid several visists to Dr. Jeremy Belknap, then of Dover, N.H., afterward of Boston, with whom he contracted an affectionate intimacy, that was broken only by death. The two possessed similar tastes, and were afterward fellow-workers in the then comparatively new field of historical and biographical research. He officiated for a short time as chaplain to the recruits of Colonel Marshal’s regiment, then being raised in Boston, for the expedition to Canada. After this he passed several months at Littleton, as the assistant of the Rev. Daniel Rogers, and during the winter of 1778-1779 supplied the First Church in Salem. Here his preaching met with great acceptance; but, before there was any decisive action in reference to calling him, the death of his venerable father occurred, by reason of which he was introduced to a field of service as grateful as it was responsible and unexpected.

The church of which his father had been pastor (the New North) immediately invited him to preach, with a view to his becoming his father’s successor. That a fair expression of the wishes of the society might be obtained, they voted to hear three others in connection with him; and the result was a very unanimous and cordial concurrence in his favor. Accordingly, he was ordained and installed their pastor on the 3d of November, 1779.

In the fourth year after his settlement he was happily married to a Miss Treadwell, of Portsmouth, N.H., who survived him. They had six children, three sons and three daughters, all of whom continued to live with their father till the time of his death.

In the year 1797 he received the degree of Doctor of Divinity from the University of Edinburgh. In 1804 he was chosen a member of the Corporation of Harvard College, in place of the Rev. Dr. Howard, then lately deceased, and in this capacity took part in the momentous election of Henry Ware to the Hollis Professorship. He was also a member of most of the literary and charitable societies in Boston and the vicinity, and in several of them he held important offices. He steadily broadened in his theological opinions, so that after his death it was inevitable that his society should, without any division, call an avowed Unitarian, Francis Parkman, to be his successor.

Dr. Eliot was intimately associated with Dr. Belknap in establishing the Massachusetts Historical Society, and to the close of life he manifested the warmest devotion to its interests. It was through his instrumentality that many of its richest treasures were obtained, both at home and abroad. He was also a liberal contributor to the different volumes of the society’s Collections. For many years he gave his leisure to researches into the history of New England, and particularly of the churches. He was constantly collecting facts about the earlier New England worthies; and his Biographical Dictionary, published in 1809, is a monument of patient and accurate historical scholarship, and constitutes his chief title to fame.

He died on the 4th of February, 1813, at the age of fifty-nine. It was on Sunday, during the time of public worship. It was communion day in his church; and in the interval between the usual service and the communion the tidings of his death were carried to his people. Dr. Lowell, who was officiating on the occasion, addressed the people in a strain of great tenderness and fervor. The funeral was attended on the 18th of February, Dr. Lathrop praying with the family and most intimate friends, and Mr. Channing performing a similar service in the meeting-house, where there was a large assembly. Dr. Lathrop preached a funeral sermon on the succeeding Sunday from I Thessalonians v. 9-11.

The following account of Dr. Eliot, written in 1861 by the Hon. Josiah Quincy, is characteristic of both subject and writer:

Dr. Eliot was my friend in my earliest manhood. Before I was of age, and while yet a student at law, as early as 1792, my acquaintance was formed with him, and continued until his death. He was one of three others (George Richards Minot, Rev. James Freeman, and Dr. Jeremy Belknap) who honored me, at that early period, with their countenance and kindness; introduced me, as soon as I was of age, into their society, and were among the causes of my early introduction into the membership of the Historical Society, and to many other societies. My sense of gratitude was then deeply engraven on my heart, and has never been obliterated. Among these my early friends and patrons, Dr. Eliot was not the least kind and efficient. In manners he was gentle and amiable, in conversation ready and instructive. He, as well as the other three, was the most direct and truthful of men. There was an open-hearted familiarity in his mind and manner singularly interesting and attractive. They were probably formed by his habitual and affectionate intercourse with his parishioners, toward whom he stood in a very peculiar relation—he was both pastor and comrade. He was settled in the same church and over the same society of which his father had been pastor for a long life. He had been educated with the members of his parish from his boyhood. They felt for him not only the respect due to his office, but the intimacy resulting from the association of childhood and youth. The old people spoke of him with the familiarity with which they were accustomed to address him when a boy and youth, in language of respect and kindness, which he reciprocated. There was something antique in his language and style, both in conversation and in the pulpit, arising probably from his familiarity with the old ecclesiastical writers. And from the nature of his identity with his congregation he retained much of that freedom, both in illustration and expression, which characterized the clergy of olden times, but which the fashion of his time repressed and soon obliterated. His discourses were, in general, suited to the audience to which they were addressed, full of simplicity and directness. The Society of the North End of Boston was at that day composed of an intelligent, active, laborious class of men, who required for their edification plain truths, plainly spoken. Elaborate arguments were not suited either to their taste or habits of thought; and the sermons of Dr. Eliot were useful, practical, affectionate, without display, seeking only right words in proper places, and appropriate truths and influences. His historical writings were rather his amusements than his studies. They were the incidental rather than the direct object of his life. He was curious in researches among old manuscripts. He availed himself of the assistance of friends, as he acknowledges in his Preface to the New England Biographical Dictionary. His historical researches were of a character of all his intellectual efforts for their truth and usefulness, without display, without any catering for fame or hope of it.