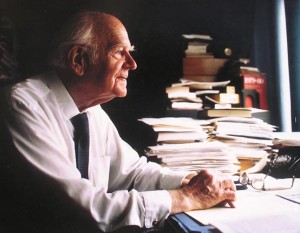 John Tileston Edsall was born in Philadelphia on November 3, 1902. When he was ten the Edsall family moved to the Boston area where his father, David Edsall, had become Jackson Professor of Medicine at Massachusetts General Hospital (and later Dean of the Harvard Medical School). John attended the Milton Academy and the Brown and Nichols School before entering Harvard College where he majored in chemistry. Following graduation he entered Harvard Medical School, but anticipating an academic career, he then spent two years studying biochemistry at Cambridge University before returning to Harvard for a MD degree in 1928. Sensing that his talents as well as his passion favored research over medical practice John continued as a Research Fellow in the Medical School. There he progressed to Professor of Biological Chemistry, but in 1954 he joined this Faculty and moved to the Biological Laboratories. John became Emeritus in 1973: thereafter he remained engaged for more than twenty years. On June 12, 2002, John Edsall died, five months short of his 100th birthday.

Edsall’s devotion to teaching was extraordinary. In 1928 he became a Tutor in the newly formed concentration of Biochemical Sciences and continued in this role for forty years, serving as Head Tutor for more than twenty years. He pioneered in forming a course on biophysical chemistry and codifying this with a textbook written in 1958 with his closest scientific colleague, Jeffries Wyman. Furthermore, John’s move to this Faculty from the Medical School in 1954 contributed much to the building of a graduate program in biochemisty here. In that year the Committee on Higher Degrees in Biochemisty was formed with Konrad Bloch, Paul Doty and Frank Westheimer of the Chemistry Department and Edsall, George Wald and Kenneth Thimann from the biology department. John served as the first Chairman. This Committee attracted outstanding new faculty members and students. In 1967 it became the Department of Biochemistry and Molecular Biology.

John Edsall’s influence will continue to be felt far into the future. His hundreds of students in Biochemical Sciences and his dozens of research students and collaborators will be affected by his accomplishments, his kindness and his integrity.

John Edsall’s contribution to science is best described by the words of Konrad Bloch on the occasion of Edsall’s retirement from the Journal of Biological Chemistry: “Throughout his career he gained prestige without seeking it, for he served science rather than used science for his own purposes.”

—From the Harvard University Gazette