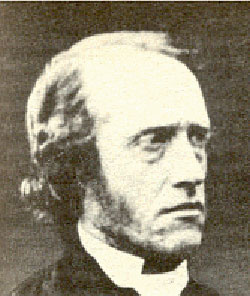 John Cordner was of Scotch-Irish parentage, and was born in Newry, near Belfast, Ireland, July 3, 1816. He was educated in Ireland, and in 1843 received an invitation from the newly organized Unitarian society in Montreal, Canada, to become its first minister. On September 12, 1843 he was ordained by the Remonstrant Synod of Ulster. He preached his first sermon to the little band of Unitarian people in Montreal on November 5, 1843 and continued the minister of this society for half a century. During all the years of his active pastorate Dr. Cordner held a morning and evening service in his church every Sunday in the year. When it was suggested to him that one service might suffice during the summer months, when the congregation was small, his reply was that it was as important for the few to have their church to come to as for the greater number, and that so long as there was one person to attend that one should find the church open.

A less resolute man than Mr. Cordner might have abandoned the work in Montreal in its initial stages. The prospect of a permanent settlement of a Unitarian minister in the city aroused bitter opposition; but gradually his eloquence, his learning, and his Christian spirit convinced his opponents that they had to deal with a man of more than ordinary force of character. Mr. Cordner always had the courage of his convictions. He preached the truth as he saw it with the boldness of a prophet of old, tempered by the gentler spirit of Christianity.

In 1844 he visited the United States for the first time, advocating the claims of the Montreal society. He received substantial aid from the American Unitarian Association; and his new church, made possible by the liberality of friends, was dedicated in May, 1845. The difficult work of a solitary Unitarian preacher, in a community where orthodox prejudice was intense, appealed to his sense of duty in a way no worldly considerations could assail. He declined to accept calls elsewhere, although among the churches who wished him to be their minister were two of the most prominent in Boston. He endeared himself to his people by his fidelity and activity as a pastor, and at the close of his ministry no minister of the city was more widely known or had a deeper hold on the respect of the community. A new church building on the site of the original structure was dedicated in September, 1858. He received the degree of LL.D. from McGill College in 1870.

As a preacher, Dr. Cordner was clear, direct, and eloquent. His mind was singularly exact. His thought was logical, and always stated with the utmost clearness. He belonged to the conservative school of Unitarians, and his isolated position required that often he should unfold and defend the principles of his faith. He was a man of marked personality, steady persistence in duty and devotion to principle. He made his church the center of his activity, but gave his service to many charitable and educational causes. He was happy in his domestic attachments. By his marriage in 1852 to the daughter of the Rev. Dr. Francis Parkman of Boston he became intimately associated with the life of the American Unitarian churches.

The latter years of Dr. Cordner’s services in Montreal found his zeal unabated, but his health infirm. An assistant was appointed, then a colleague, and finally in 1882 Dr. Cordner removed with his family to Boston. There he was able to render another signal service to the Unitarian cause. He was made one of the Building Committee for the new building of the American Unitarian Association, and gave to this enterprise unwearying labor. At the opening of the building in 1886 Dr. Reynolds, secretary of the Association, said,

In the direct fulfillment of the work of building, the collection of the money, the obtaining of the plan, the supervising of the work with scrupulous care and fidelity, no person has done so much as Dr. Cordner.