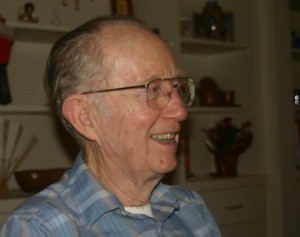 John Cobb was born in Japan in 1925 to parents who were Methodist missionaries. In 1940, he moved to Georgia to go to high school. After graduation he attended a junior college, Emory College (now Oxford College of Emory University) at Oxford, Georgia. He was deeply devout and held strong moral convictions, fighting racism and prejudice among his peers. Joining the army in 1944, he met intellectuals from other religions, including Judaism and Catholicism, who showed him new perspectives. It was about this time that he had a religious experience that led him to become a minister.

These experiences gave him a taste for intellectual thought. He entered an interdepartmental program at the University of Chicago, where he tested his faith by setting out to learn all the modern world’s objections to Christianity, so that he could answer to them. His faith did not come out intact. Cobb became disillusioned with much of his previous belief. Hoping to resolve his crisis of faith and reconcile the modern worldview with his Christian faith, he went to University of Chicago Divinity School in 1947. He was successful primarily with the help of Richard McKeon, a philosophical relativist, and Charles Hartshorne, who taught him Whiteheadian metaphysics and philosophy, which Hartshorne had integrated into what would become known as process theology. This gave him renewed confidence in the idea of God. Cobb received his M.A. in 1949 and Ph.D. in 1952.

Click here for supplemental reading about John B. Cobb on Amazon.