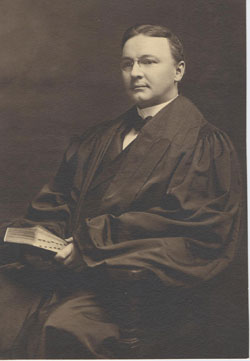 Joel Hastings Metcalf, clergyman-astronomer, lover of nature and of humanity, was born at Meadville, Pennsylvania, on January 4, 1866, and died at Portland, Maine, February 21, 1925. Following his graduation in 1890 from the Meadville Theological School, he took postgraduate work at the Harvard Divinity School and in that year he married Elizabeth Lockman of Cambridge. In 1892 he received the degree of Ph.D. from Allegheny College. In 1903 he continued graduate work at Oxford University. He received a Doctorate in Divinity from the Meadville Theological School in 1920. He was for a few years the minister of the Roslindale Unitarian Society, and then held pastorates at Burlington, Vermont (1893–1903), Taunton, Massachusetts (1904–1910), Winchester, Massachusetts (1911–1920), and at Portland, Maine (1920–1921).

Throughout his ministry he showed a very high ability, a wide tolerance and vivid faith. Outwardly simple and wholly unpretentious in manner, he met each man on his own plane, and took him at his best. His eagerness to serve his fellow men was demonstrated in World War I when, in 1918, he obtained leave of absence from his parish and went overseas as a Y.M.C.A. secretary attached to the Third Division, with which he served at the front. He showed remarkable courage and ingenuity and a self-sacrificing devotion to the welfare of the men under his care. For getting food and supplies to men in exposed positions at Chateau-Thierry, he received a citation for special bravery. Offered a United States chaplaincy with the rank of captain, he declined believing that he was better able to help as a Y.M.C.A. worker.

As a devoted Unitarian, he was deeply concerned over the postwar condition of Transylvania, the birthplace of modern Unitarianism, and gladly accepted a commission from the American Unitarian Association to enter that shattered country to bring aid and encouragement to the Unitarian churches. In this labor he was a tower of strength. On one occasion he made a daring trip from Bucharest to Cluj with about $10,000 in currency. As a result of his visits throughout the province, he left a host of friends and admirers.

Dr. Metcalf was no stranger to Europe. For many years, during his summer vacations, he had conducted tourist parties to England and the Continent. Although these tours were primarily for sight-seeing, he was keenly alive to European politics and social movements as well as to cultural values, a knowledge of which he skillfully imparted to his fellow travelers.

Dr. Metcalf was not only an able minister, but a noted amateur astronomer. In spite of a busy life, he was able to serve a great scientific interest which stemmed from a boyhood fascination with the stars. When he was fourteen years old, he took from a Sunday-school library a book called Other Worlds Than Ours, by Richard Proctor. This book became an open door through which he caught glimpses of the Universe.

His first real telescope, purchased for $500, was delivered perilously across the ice of Lake Champlain and set up near the parsonage in Burlington. During the years that followed, Dr. Metcalf discovered six comets, forty-one asteroids, and several variable stars. The comets bear his name as a perpetual memorial to their discoverer. He was awarded five medals by foreign astronomical associations, and was made a Fellow of the American Academy of Arts and Sciences, and of the American Astronomical Society. For a time he was chairman of the Visiting Committee of the Harvard Observatory.

He also excelled in applied optics, computing lens curves and grinding lenses. He made a special telescope for Harvard Observatory used by that institution for stellar photography. At his death, he left a half-finished lens which was later completed and used in the discovery of the ninth planet, Pluto.

Dr. Metcalf lived through a period of controversy between science and religion. His sermons bear witness to his intense interest in the subject and to his knowledge of its implications. Intellectually fearless and spiritually devout, he made it his business to cast down the barriers which threatened to separate the two fields of human thought and endeavor. For him there was no necessary division between them. He lived in the happy consciousness of a vast life, wherein the probings of the mind were to be completely free and unimpeded. With Kepler he could say, “The undevout astronomer is mad.”