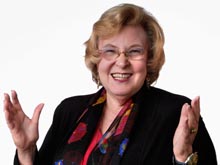 The Rev. Joan Brown Campbell is the first woman to lead the National Council of Churches of Christ in the USA as its general secretary. Her ministry has encompassed a broad range of responsibilities, with a strong focus on church unity, cultural diversity, and women’s issues. She is a dynamic Christian leader and role model, advocating equality, peace and justice in the world.

“When I was much younger, I was privileged to know and work with Martin Luther King, Jr. It was a formative event in my life. His commitment to the beloved community inspired us when he was alive and informs us still. Martin Luther King was far from a saint, but he was a man of faith, and he was filled with the Holy Spirit. One of the signs of t was that he often moved against his own self-interest and finally, as we know, he was required to give up his very life for his people. And we are all beneficiaries of that sacrifice. He constantly preached love your enemy. Listen to his words. ‘The darkness of racial injustice, he said, ‘will be dispelled only by the light of forgiving love. Forced to live with shameful conditions, we are tempted to become bitter and to retaliate with a corresponding hate.’ If this happens, Martin Luther King warned, the new order that we seek will be little more than a duplicate of the old order. We must meet in strength and humility, meet hate with love.

“For just that message, he was jailed; he was ridiculed. He was accused of being a perpetuator of violence even as he lived a counter cultural life of non-violence. His very being was a threat to the nation and, yes, I’m afraid even to the churches. He was seen as one who disrupted the careful orders of life that preserved privilege and special status. His radical spirituality called the cool, unfeeling faith of many into question. He set about to turn the world upside down, and by his living and dying he proved that one man, armed with truth and courage, can move up a whole nation.”