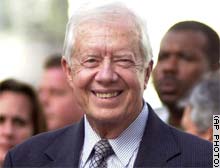 Jimmy Carter aspired to make Government “competent and compassionate,” responsive to the American people and their expectations. His achievements were notable.

Carter was born October 1, 1924 in Plains, Georgia. Upon graduation n 1946 from the Naval Academy in Annapolis, Maryland, Carter married Rosalynn Smith. After seven years’ service as a naval officer, Carter returned to Plains. In 1962 he entered state politics, and eight years later he was elected Governor of Georgia. Among the new young southern governors, he attracted attention by emphasizing ecology, efficiency in government, and the removal of racial barriers.

Carter announced his candidacy for President in December 1974 and began a two-year campaign that gradually gained momentum. Carter campaigned hard against President Gerald R. Ford, debating with him three times. Carter won by 297 elector votes to 241 for Ford.

Carter could point to a number of achievements in domestic affairs. He dealt with the energy shortage by establishing a national energy policy and by decontrolling domestic petroleum prices to stimulate production. He prompted Government efficiency through civil service reform and proceeded with deregulation of the trucking and airline industries. He sought to improve the environment. His expansion of the national park system included protection of 103 million acres of Alaskan lands. To increase human and social services, he created the Department of Education, bolstered the Social Security system, and appointed record numbers of women, blacks, and Hispanics to government jobs.

In foreign affairs, Carter set his own style. In the Middle East, through the Camp David agreement of 1978, he helped bring amity between Egypt and Israel. He succeeded in obtaining ratification of the Panama Canal treaties. He established full diplomatic relations with the People’s Republic of China and completed negotiation of the SALT II nuclear limitation treaty with the Soviet Union.

—Courtesy of the White House

Since leaving office, Jimmy Carter has been the most active of ex-Presidents. In 1982, he became University Distinguished Professor at Emory University, in Atlanta, Georgia, and in partnership with the University, founded the Carter Center to resolve conflict, promote democracy, protect human rights, and prevent disease around the world.

President Carter has long served on the board of directors of Habitat for Humanity, a nonprofit organization that helps build homes for the needy in the United States and in other countries. He and Rosalynn Carter themselves volunteer with the organization for one week every year.

—From the Academy of Achievement