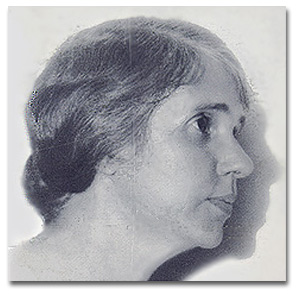 Jessie Taft. Courtesy of the University of Pennsylvania Press.

Jessie Taft was a brilliant symbolic interactionist who studied women, their view of the world, and the application of their values in various situations. A feminist, a scholar with limited academic ties to sociology, and a noted social worker, Taft worked in a professional world distinct from that of mainstream, academic men in sociology. Her incisive work has been ignored by sociologists.

Taft was born on June 24, 1882, when women were agitating for the right to higher education. Her parents, Amanda May Farwell and Charles Chester Taft moved from Vermont to rural lowa where she was born and raised. Her father ran a prosperous wholesale business selling fruit, making this “old” American family, financially comfortable, but not affluent. Jessie was the eldest of three daughters, and her mother was a traditional homemaker who suffered from progressive deafness. This disability led to increasing isolation from her children. Virginia Robinson, Taft’s biographer, euphemistically explained this distance between mother and daughter: “Her mother was too competent a cook herself to want the children bothering her in the kitchen.”

Robinson reveals little conflict or passion between Taft and her parents, or between Taft and Robinson, although these women lived together for more than forty years. Such a lifelong friendship, including adoption of two children—Everett and Martha Taft—must have generated deep ties. Passionate, work related, long-term relationships were characteristic of early women professionals, particularly sociologists. The few glimpses that Taft reveals about herself in her published writings, especially in her biography of Otto Rank, reveal her intensity, generosity, and involvement with others. 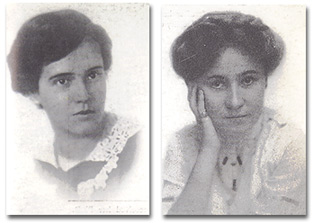 Jessie Taft, left, and Virginia Robinson, pictured circa 1910, the approximate time of their first acquaintance. Courtesy of the University of Pennsylvania Press.

In addition to her father, Taft was profoundly affected by two men, George H. Mead and Otto Rank. (1982), But as great as the imprint left by men, Taft’s life was surrounded by women: their ideas, issues, friendships, life-styles, and institutions. Her life with Robinson, her friendship with Ethel Sturgess Dummer, her feminist epistemology, and her female clients and colleagues are all indicators of her woman-centered life.

Characteristically, Robinson summarizes Taft’s adolescence in a few words: “Loving food, she took on weight too fast and was painfully sensitive to being overweight and outsize. In retrospect, adolescence flattened out into a long desert waste marked by evenings of boredom spent on the porch in the intense heat of an Iowa summer.”

During Taft’s late adolescence her scholarly interests were fostered by a female physician, who influenced her undergraduate training at Drake University in Des Moines, Iowa, where she earned a bachelor’s degree in 1904. Jessie’s father experienced the ambivalent feelings toward “educated women” characteristic of his era, but he nonetheless actively supported her choices. With this mixed background of traditional Midwestern roots and emancipatory support, Taft pursued additional academic training and a professional career. 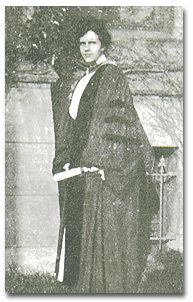 It is possible that this professional work helped to heal some private conflicts revealed as anonymous “case studies” in her writings. For example, because we know that Taft was both overweight and befriended by a female physician, Taft’s description of “a neurotic girl” with these characteristics may have been autobiographical. The “case study” analyzes the pain suffered by the child who “was clumsy, pigeon-toed, and inclined to be afraid to use her body. Her parents laughed at her attempts to walk and run and at her frequent falls. They exaggerated her timidity and encouraged her not to try any unusual feats.” She was called “Fatty” by other children, and responded by overdeveloping her intellectual interests. Taft concludes “this case” by noting that “middle age finds this girl just beginning, through analysis of her own behavior, to get a legitimate self-confidence intellectually and socially and the free use of her own body, which wasn’t particularly inferior after all.” Clearly this case history echoes the life of Taft herself.

A more documented peek into her life is provided in another article, published in 1926, when she was thirty-eight years old. Here she discussed the joy of being a foster parent, recovering her emotional ties to children:

I can remember a world thirty years ago when I, a child in that world, found nothing attractive in the traditional picture of a woman’s part in life. There was no thrill, no challenge, no promise of recognition and reward. The thought of having children, or bringing them up, or creating a family, far from presenting an alluring possibility of adventure and achievement, a field in which expert skill and knowledge might find expression, loomed before me as a fate to be avoided if possible, the crushing end of all individual development. 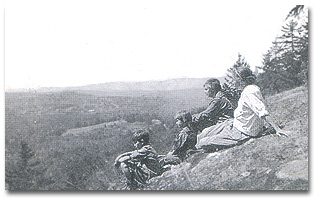 Summer in New Hampshire, 1923: Everett and Martha Taft, Jessie Taft, and Virginia Robinson. Courtesy of the University of Pennsylvania Press.

Healing the divisions between her female values and experiences and her male intellectual interests was a lifetime process. Clearly these conflicts arose from her biographical situation as a child in Iowa.

Whatever the stress of these early years, by 1905 Taft had moved to Chicago and earned a bachelor of philosophy degree from the University of Chicago. Although Taft was enrolled as an undergraduate, all her coursework was done at the graduate level at this time the university was an intellectual center for the Midwest. Despite this vibrant life, Taft’s separation from her family and responsibilities evoked a sense of guilt, and she soon returned to Des Moines. For the next four years Taft taught Latin and algebra at West High School in Des Moines. This work and her family situation were too limiting, however, and Taft was drawn once more to fulfilling her broader social claims. Thus, in the summer of 1908, she went back to the University of Chicago.

This summer became a turning point in her life. She studied with W. I. Thomas, who was developing a number of radical ideas on women’s dress, standards of behavior, right to vote, and occupations She also met Virginia Robinson: together they explored ideas, friendship, and professional commitments. Both women returned to their respective teaching positions at the end of the summer, but longed to do more invigorating and substantial work. When the University of Chicago offered Taft a fellowship in 1909, she eagerly accepted it.

The years from 1909 to 1913 are crucial for understanding Taft’s career in sociology. During this time she selected George H. Mead, one of the founders of symbolic interactionism, as her doctoral chair. She also found her first professional employment, established her deep professional and personal identification with never-married female sociologists, and entered the women’s network in sociology that was located largely outside the academy. Taft entered the world of professional female social scientists through her University of Chicago connections, especially through Marion Talbot. The latter helped to place Katherine Bement Davis in a position at the Bedford Hills Reformatory for Women in New York. Davis, in turn, hired Taft and Robinson to conduct interviews on the relation between crime and “feeble-mindedness.” Thus, in 1912, the young scholars began their work with Davis that led them away from academic sociology and ultimately to “social work.” 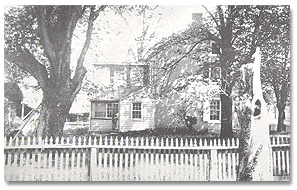 Taft’s home in Flourtown, Pennsylvania. Courtesy of the University of Pennsylvania Press.

Although Taft and Robinson criticized the statistical process they used and their categorizing of people, they had found an exciting and promising career. Taft returned to Chicago and, in 1913, completed her doctorate on “The Woman Movement from the Standpoint of Social Consciousness.” She wanted to become a professor, but the academic barriers to women were nearly insurmountable. In addition, she was partially supported by an applied sociology network with goals and training similar to hers, but located primarily in the Midwest. Her first jobs, however, were located in an Eastern network of female social workers with different training, ideals, goals, and practices.

Taft’s view of the reformatory’s work and that of the new superintendent conflicted. Taft soon left Bedford Hills without a recommendation. When Taft sought help from Mary Richmond, an eminent Eastern social worker, Taft’s ”qualm apparently did not impress Miss Richmond who told her she would need training in a good casework agency under a competent supervisor.” Unable to find work, this talented philosopher considered returning to her home or ”living off her father.” 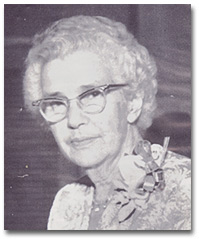 Jessie Taft, June 1959. Courtesy of the University of Pennsylvania Press.

Fortunately the director of the Mental Hygiene Committee of the State Charities Aid Association of New York resigned, and Taft filled the position. She again resigned two years later when a change in leadership occurred. She wrote Robinson of her struggles with despair: “I feel so cowardly and good for nothing. But I brace up soon. It isn’t like this all the time.” By 1918 she had been searching for meaningful employment for fourteen years.

Taft’s continuing commitments to sociology can be seen in her work at the American Sociological Society meetings in 1921 and 1925. Both the sessions in which she presented her work were organized by Dummer, showing again the importance of the female network in Taft’s sociological career. Women’s extreme difficulty in finding academic employment in sociology in this era is reflected in Taft’s life. Her marginal faculty appointments began in 1919 when she was hired as a part-time psychology instructor in extension courses at the University of Pennsylvania. She continued in this peripheral position for ten years. Taft literally had to “beg” for a class of regular students, and in 1929 she was finally allowed to teach advanced personality courses to vocational students. 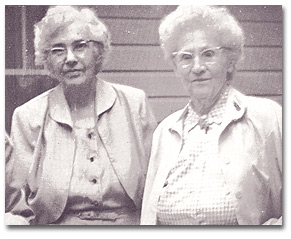 Jessie Taft and Virginia Robinson in Vermont in the summer of 1959. Courtesy of the University of Pennsylvania Press.

Despite her erratic employment in a field for which she was untrained, Taft soon became a leader in social work, first in Philadelphia and then nationally. In many ways—too numerous and complex to explore here—Taft shifted her theory, practice, and network after her charismatic encounter with Otto Rank in 1926. Taft became the director of the School of Social Work at the University of Pennsylvania in 1934, and she filled this position until her retirement in 1950. She tried to write her autobiography in the early 1950s, but she became too frustrated to complete it. She switched to writing the biography of Rank. This work was both taxing and rewarding: documenting Rank’s leadership in social work and his central role in Taft’s life after 1926. Taft died rather suddenly in 1961, eleven years after her retirement. Robinson characterized this period as generally happy and fulfilling.