In the 16 years that Jean Mayer was president of Tufts University, he transformed an indebted and struggling institution into a world-class university, with 10 schools and campuses on 5 continents. Tufts has come a long way, since Hosea Ballou II helmed a small, one-building college on a hill.

With his retirement in 1992, Mayer left behind a Tufts University that bore only passing resemblance to the “sleepy New England educational center” he had inherited: today, Tufts thrives, with an endowment of over one billion dollars, a diverse, international student-body, ten schools, and five campuses on two continents.

The following is a brief summary of Jean Mayer’s arrival at Tufts, then a financially-struggling and often-overlooked institution, and the many great changes that he set in motion.   It is adapted from An Entrepreneurial University by Sol Gitteman (Tufts Univ. Press: Medford, 2004), an engaging overview of the Mayer year’s at Tufts. 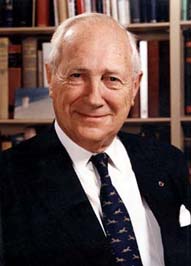 When Jean Mayer assumed the presidency of Tufts in 1976, it was the third time he had been up for the job. The board had passed him over first in 1967 in favor of Burton Hallowell, an administrator from Wesleyan University. Hallowell endured for a decade, and after his resignation, the board selected Harry Woolf, provost at the time. Mayer had been again passed over. It was only when, to much surprise, Woolf declined to accept the position of president of a university with a financial deficit that the Tuft’s Trustees turned, “hat in hand,” to Mayer, who exclaimed, “I’ll do it.”

At the time, to be president of Tufts was no enviable position. The challenges facing the university were enormous. There were serious concerns about the its financial viability. The deficit that Burton Hallowell had inherited in 1967, in the absence of substantial fundraising, had grown only larger, swelling to $1.5 million. The Tufts Board of Trustees played little active role in searching for funds, and was not particularly interested in presidents who would do the same. This university was in crisis.

A consultant’s report was candid in its assessment, grimly judging that Tufts simply “could not raise dollars sufficient to meet its needs.” It was a nightmarish environment for a president, with the university limping along from payroll to payroll, and under constant threat from a growing deficit.

This was the job that Mayer leapt at.

Mayer arrived at Tufts with a program that no one could have anticipated. Here was a university, facing tremendous financial and structural challenges, and Mayer, in his inaugural address, rather than preaching stability and prudence, announced a bold new venture: he would establish a veterinary school at Tufts, the only one in New England. In short order Mayer had secured a 634-acre land grant for the new facility and was soon recruiting the first incoming class. It was clear from the very outset that Mayer was a new kind of university president.

Mayer’s plans did not end with the Tufts School of Veterinary Medicine. A national authority on nutrition issues, Mayer immediately began laying plans to bring Tufts a nutrition research center. Mayer wanted nothing less than the nation’s first School of Nutrition. In 1977, with the assistance of a new academic lobbying firm and the Massachusetts congressional delegation, the federal budget included a line item for a new School of Nutrition operated by Tufts University. The other faculties were shocked. Tufts had hardly participated in the brawl for federal funds, and here, their new president had waded into the thick-of-it and emerged successful.

The problem of finances, however, remained. Tufts’ endowment remained small, some $30 million, and now Mayer had introduced two bold, new, and expensive endeavors. The next natural step was to start looking for money, something that Tufts’s trustees had been traditionally unwilling to do, and something that Tufts’ alumni had never been asked. It was uncertain ground. A consultancy in 1976 estimated that though the university’s needs were in excess of $60 million, a $12 million campaign was all Tufts’ giving base could support. They might not as well not have bothered.

Mayer pushed through a $140 million capital campaign,  a goal which was achieved five years later in 1984, to be swiftly followed by a $200 million campaign. This was fundraising on a novel scale for Tufts, and an unprecedented success. It was not, however, without it’s challenges. Three trustees resigned in response to the grandiosity of the plans and the willful determination with which Mayer sought to realize them. Mayer raised, in all, over $400 million for Tufts.

In 1992, as the Trustees looked at Mayer’s unbroken stream of developments, they began to consider moderating the pace of Tufts’ development. Mayer, at age 70, was still eagerly initiating new projects, including a massive expansion of the downtown medical school. The board began considering a successor. They compromised with Mayer, by promising him the position of Chancellor of the University, a position newly created for him, with considerable prestige, but limited hands-on influence. Mayer was clearly disappointed. Shortly thereafter, before making his mark from his new office, Mayer died suddenly of a heart attack at the age of seventy-two.

Jean Mayer and Tufts in the New York Times

At  Tufts, the pace of Jean Mayer’s activity was astonishing. A New York Times article in 1986—when Mayer has been leading the university for a decade—breathlessly enumerated his accomplishments: “[Tufts] has broken new ground with centers for the study of environmental medicine and aging, and graduate programs in nutrition and veterinary medicine.” The program in nutrition—Mayer’s own field of research—was the first such enterprise in the nation. The veterinary school was part of Mayer’s push to increase New England’s educational offerings, and today, remains the only such institution in the region.

Other portions of the stolid institution were revitalized: new centers proliferated. A center for health communications opened on Tuft’s Boston campus, followed by another on environmental management, and another on aging. Mayer’s burst of  activity lifted the perception of Tufts as “a sound, middle-aged university that seemed forever in the shadow of Harvard and MIT.” His feverish pace attracted critics, but few could argue that he wasn’t doing his job: shortly after assuming the role, Mayer launched a $145 million capital campaign, the largest in the school’s history.

His many changes ruffled some feathers. “I had to replace every dean and vice president because they were not performing as I expected,” Mayer told the New York Times. Such bold claims were characteristic of Mayer, who nevertheless, struck many as “warm, thoughtful, [and] witty.”

Dr. Jean Mayer’s career was stunning in its breadth and diversity: French-born, Mayer fought with great distinction for the Free French forces during World War II, acquiring a dozen-odd lofty military honors. In his academic career, he became a global spokesperson on issues of poverty, aging, malnutrition, and obesity, advising three presidents on national policies and global, penning some 750 academic papers and 10 books. He taught at Harvard for 25 years, before proceeding to helm Tufts for nearly two decades, transforming a small liberal-arts college into a research university.

Mayer was an adviser to President Richard M. Nixon, and organized the 1969 White House Conference on food, Nutrition, and health, which led to the introduction of food stamps for the poor and an expansion of the school lunch program for the needy.

He traveled on relief missions around the world, raising the profile of global poverty an nutrition issues, and promoting increased foreign aid to poverty-stricken regions.

An Entrepreneurial University by Sol Gittleman