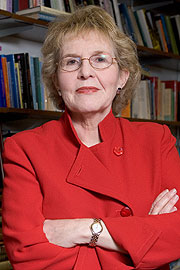 Jean Bethke Elshtain is a political philosopher who shows the connections between political and ethical convictions. A popular lecturer and a contributing editor for The New Republic, Elshtain is the author of more than 500 essays in scholarly journals and journals of civic opinion. Among her books are Jane Addams and the Dream of American Democracy, New Wine in Old Bottles: International Politics and Ethical Discourse, Democracy on Trial, Women and War, and Public Man, Private Woman: Women in Social and Political Thought.

Her most recent book, Just War Against Terror: The Burden of American Power in a Violent World, was praised by the New York Times Book Review for challenging simplistic assumptions about the war against terror and offering, instead, “intellectual clarity.” It was named one of the best non-fiction books of 2003 by Publisher’s Weekly.

—Courtesy of the University of Chicago

Just War Against Terror: The Burden of American Power in a Violent World by Jean Bethke Elshtain (2003)