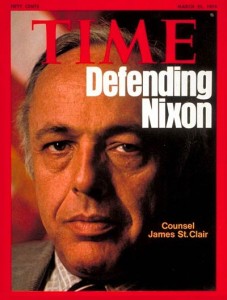 James D. St. Clair was described by The New York Times as a Boston trial lawyer who, in a career spanning half a century, “developed a reputation as a dignified, courteous, highly competent advisor to a wide range of clients who spanned the political spectrum.”

To Rev. Robert F. Drinan, a former congressman who is now professor of law at Georgetown University Law Center, “James St. Clair was my idol as to what lawyers should do… He represented the president of the United States, and he never said a word to anybody, never went on the talk shows, never wrote a book… He was like a priest or a psychologist.”

And to his law-firm colleagues and friends at Hale and Dorr LLP, St. Clair was “a living legend,” in the words of managing partner William Lee. Jerome Facher, another Hale and Dorr partner who was portrayed by Robert Duvall in the movie A Civil Action, called St. Clair simply “the best trial lawyer I’ve ever known.”

James Draper St. Clair, born in Akron, Ohio, was a graduate of the Harvard Law School who served in the Navy during World War II. Mr. St. Clair first came to national prominence during the Army-McCarthy hearings. Winning praise from many liberals for his role in ending McCarthy’s anti-Communist witch hunt, Mr. St. Clair insisted, according to The Boston Globe, “on accepting clients from across the ideological spectrum,” and that “he cast himself as a dispassionate counselor for people enmeshed in some of the most politically and socially polarizing cases of the century.”

Widely known during Watergate as President Nixon’s lawyer, Mr. St. Clair also represented documentary filmmaker Frederick Wiseman when Titicut Follies, Wiseman’s expose of conditions at Bridgewater State Hospital, was banned in Massachusetts. In 1968 he defended Yale’s chaplain, the Rev. William Sloane Coffin, Jr., when he was brought to trial for advising young men to burn their draft cards during the Vietnam War.