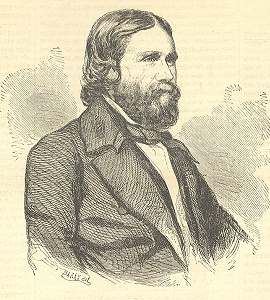 A poet of great renown in the 19th century, Lowell was one of six children born to Harriet B. Spencer and Charles Lowell, the Unitarian minister who served the West Church of Boston for many years. The elder Lowell was theologically Unitarian, but he refused to attach himself to any definitive denominational label other than Christian. “Jemmie” was born on February 22, 1819 in Cambridge, Massachusetts at what became the family estate, “Elmwood.” After attending a number of local schools he enrolled at Harvard College at the age of 15.

Lowell was attracted to the power of words at an early age, and especially enjoyed his class in Rhetoric, taught by William Ellery Channing’s brother, Edward. He proved a lackluster student though, and was suspended in his senior year for neglecting his work. He was tutored by Barzillai Frost, the pastor of the parish church in Concord, Massachusetts, and there had the opportunity to meet Ralph Waldo Emerson. He liked Emerson personally, but seemed to find his doctrines too ethereal.

Lowell was elected class poet, a label which worried his father who wondered if he would ever amount to anything. After his graduation from Harvard in 1838, Lowell considered being a preacher like his father, but decided to take a law degree instead. The year of his graduation he said, “I am an infidel to the Christianity of today.” Later in a letter to Henry Wadsworth Longfellow he wrote that the church must be reformed “from foundation to weathercock” (as quoted in Cooke, Unitarianism in America, 434). Like Emerson he drew much of his inspiration from nature, and he considered himself an intuitionalist. At times in his later life he showed some interest in more traditional faiths, but ultimately he rejected the idea of creeds, and found his church in “universal Love.”

In 1840 Lowell married Maria White of Watertown, Massachusetts, who was an accomplished poet in her own right. She became part of one of Margaret Fuller’s Conversation groups. Maria and her brother William, who had been Lowell’s classmate at Harvard, helped stimulate his interest in the social problems of the day. By 1842 he became convinced that he would never succeed as a lawyer, and he turned his attention full time to writing, and published his first book of poems. His interest in reform grew after he moved to Philadelphia to edit an anti-slavery periodical. In the late 1840’s the Biglow Papers began to appear. These were political satires meant to express opposition to the Mexican War, which Lowell depicted as an effort to extend slavery. Before 1850 he published three other significant works. First, there was his contribution to the Arthurian legend, where Lowell democratized the search for the Holy Grail in The Vision of Sir Launfal.

The other publications which helped secure his fame as a major figure in American literature were Poems: Second Series and the witty, biting evaluation of contemporary American authors, A Fable for Critics. Here he confronted the Unitarians, when he asked if they formed a religious union based on total dissent, how they could label Theodore Parker a heretic? During these early years of publishing success, Lowell began to suffer a series of devastating personal losses. By 1852 three of his four children had died, and Maria, his wife, died the following year. In 1855 a series of lectures on English poets led to his appointment to a professorship at Harvard. He married Frances Dunlap, the nanny for his remaining child, Mabel, in 1857.

He published a second series of Biglow Papers on the subject of the Union cause. He also served as the first editor of the Atlantic Monthly, and later with Charles Eliot Norton, of the North American Review. Lowell became one of the founders of the Saturday Club, a monthly gathering of local writers for dinner and conversation. As he grew older the reform impulse of his youth faded as he embraced his aristocratic heritage. Much of his later writing consisted of critical essays on important literary figures. He won political appointments from 1877-1885, first as U. S. ambassador to Spain, and later to England.