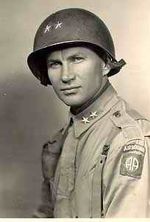 James M. Gavin was born in Brooklyn, New York on 22 March 1907. When he was about two years old, his parents placed him in the Convent of Mercy orphanage in Brooklyn. From this point he was in state care, until he was adopted in 1909. His adoptive parents were Martin and Mary Gavin, a coal mining family living in Mount Carmel, Pennsylvania.

Gavin was a graduate of the United States Military Academy, Class of 1929, and the first commander of the 505th Parachute Infantry Regiment. When he took command of the 82nd Airborne Division during World War II, he was the youngest Major General commanding a division since the American Civil War.

General James M. Gavin also played a central role in integrating the U.S. military, beginning with his incorporation of the all-black 555th Parachute Infantry Battalion into the 82nd Airborne Division. The 555th commander, Colonel Bradley Biggs, referred to Gavin as perhaps the most “color-blind” Army officer in the service.

General Gavin is the author of Airborne Warfare (1947), a recap of the development and future of aircraft delivered forces; On to Berlin (1976), an account of his experiences commanding the 82nd Airborne Division; and Crisis Now (1968), a proposal for the United States to exit the Vietnam War.