delivered at A Celebration of Life held in Boston at the Arlington Street Church on October 23, 1994 by
by Max L. Stackhouse
Professor of Christian Ethics, Princeton Theological Seminary 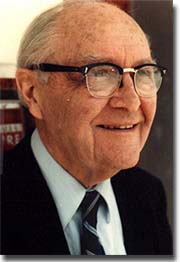 James Luther Adams dictated two letters when one of his many strokes forced him to ponder his own mortality with a new urgency. In the first letter, he specified that a memorial service be held here at Arlington Street Church (rather than in an academic setting), that it be on a Sunday afternoon so that his daughters and the clergy could come, and that we have particular pieces of music.

His wishes in death extended his commitments in life: he loved the church and called academia to attend to its importance in the souls of individuals and in the destiny of civilizations, even though he was often impatient with it. He loved his family, in spite of the fact that he knew that he often neglected them because he was preoccupied with a multitude of adopted sons and daughters, represented by the many ministers and professors here today.

And he loved the arts, holding that true beauty also shows itself to have a “heart of service,” one that can reveal “the nature of existence and the character of the transformed life,” as a marvelous article of homage to him states in the new issue of Arts.

Music was his labored art. Although he was a student and teacher of literature, and although he introduced theological students to the importance of sculptors and painters from Giacometti and Cezanne to Bosch, his early training on the violin and his half century marriage with his beloved Margaret, herself a musician, prompted them to explore the glory and anguish of life through the harmony and dissonance of composed sound. Their first date was to hear Bach’s St. Matthew’s Passion, a piece to which he never referred without noting Soderblom’s comment that it should be called the “fifth gospel;” but I always suspected that the “other” evangelist of his life was really Margaret, not Bach.

In his letter, he is very specific about the music he wanted. Mozart’s Ave Verum, Brahms’ How Lovely Is Thy Dwelling Place, and Berg’s Concerto for Violin and Orchestra were his choices. His comment on the Berg is the most extensive. It was written, says Adams, to commemorate Gustav Mahler’s relationship to his daughter, and it involves a Bach-like statement of a transcendent care that remains even when death triumphs over life.

The letter reveals, however, not only his commitment to the classical tradition and to its capacity to reveal the depth of meaning; but his awareness that truth and beauty are tied to social justice and commitments. Thus, his next sentence asks that those gathered today sing the Black National Anthem, Lift Every Heart, as was done also at Margaret’s memorial service.

There is a second letter supplementing the first. This one specifies the biblical texts he wanted us to include. Again, his choices are revealing. The first is the Good Samaritan, perhaps the key parable for teachers of ethics with an ecumenical bent of mind. As everyone knows, its focus is on the compassion of a stranger for the victim; but not everyone knows, as Adams did, that the stranger belonged to a reviled people who were not only viewed as ritually impure, but as a sect who, like the early church, refused to follow the established religious authorities. Both his early Baptist roots and his later Liberal instincts warmed to that. In contrast to self-important but morally blind leaders of sacramentally-preoccupied religion, here is a hero who got the ethical point of the common tradition — and knew that justice and care for the neighbor cost, effort, personal engagement and financial support for healing institutions.

Second, Adams wanted selections from the story of Hosea the prophet and his wife, Gomer. Here we see the betrayal of relationships as the expression of the perpetual crisis between God and the People of God. Gomer, image of the chosen people of all generations, races, sexes and life-styles, always wants to return to the wanton life, and Hosea represents both the legalistic impulse that wants to hedge her in with thorny laws and the wrath of God that judges her waywardness. But God calls Hosea to remember the power of forgiveness that can overcome faithlessness and restore righteousness. Many of us here have felt a forgiving spirit in Adams; some, mostly people not here, only his judgmental side. Whether he selected this passage as his own final statement of contrition and request for forgiveness, or as a statement about the kind of divinity he affirms, is between him and God.

Interestingly, Adams also wanted some readings from Proverbs — passages, he said, which reflect hellenistic thought. Now, how much hellenism is in Proverbs is a matter of scholarly dispute, but the dispute is revealing. Throughout his life in the Unitarian Universalist movement, he pressed the members of his denomination to remember their rootage in the biblical and classical theological traditions. We can see this in his involvement in the Unitarian Universalist Christian Fellowship, and in the wonderful new collection of James Luther Adams Papers they published.

But in the face of hyper-revelationists of all stripes, he was also a natural law theorist. He felt deep affinities to those classical and Enlightenment philosophers who believed that all humans could know something of true wisdom and of the principles of justice without biblical revelation. Indeed, this motif of his thought caused him to prefer the philosophical approaches of Tillich and Whitehead to the proclamatory styles of Barth and Bultmann. And it both connected him to Roman Catholic natural law teachings and drove him into conversation with secular theories of sociology and jurisprudence.

Even more, in a century divided by nationalistic, ideological, cultural and racial hostilities, he emphasized the universality of humanity. Many know of his encouragement of opponents of the Nazis. Fewer know that he and Lewis Mumford were the first Americans to join the Societe Europenne de Culture, an organization that called intellectuals and artists to the tasks of reconstruction after the war. He was invited to join the very year that Albert Schweitzer also joined. In a recent tribute to Adams, Madam Michelle Campagnolo Bouvier, the International General Secretary of the Societe, said that he was a “living example of an homme de culture engage, who for forty years shaped the society, “conveying (his)…precious judgment on many important issues of our day to…colleagues all over Europe East and West and the Americas.”

How did all these themes fit into a life that extended from the meager beginnings of a country preacher’s kid at the beginning of this century through an energetic life as student, preacher, scholar, teacher, and activist to the cosmopolitan brink of the next century? We have heard the stories of his life, and we suspect that most of them are true. We know that he was elected president of some of the most distinguished academic societies of the land, editor of many more than a dozen books, journals and collected papers, co-founder of even more than a score of advocacy organizations, author of enough essays to fill, so far, seven volumes of essays edited by others, and the inveterate correspondent with hundreds of acquaintances. We know that he and Margaret fought racism and sexism in pioneering ways, and he struggled personally and politically to find how intimacy and ultimacy could be embodied in affectional bonds and social institutions. It remains a mystery how all this fit together with such integrity and charm.

We have tried to capture some of the rich texture of JLA’s contributions by asking representative friends, disciples, editors and colleagues to select favorite readings: from his early student, George Huntston Williams, now Hollis Professor of Divinity, Emeritus, at Harvard University, to Professor Stephen Mott, who just these last weeks has helped Louise Des Mairis do the final editing of the forthcoming volume of JLA memoirs entitled,Not Without Dust and Heat. We invited non-clergy and non-academics to join in this memorial service to indicate the range of his influence. In all, we see a complexity of soul that only “chaos theory” could begin to chart.

Clearly, he early chose not to follow Aristotle’s advice that virtue is the gentleman’s sober, cool habituation into a middle path that avoids extremes and controls the passions. Instead, here is a life full of dust and heat that knows reason, yet agrees with Pascal that the heart has reasons that the mind knows not of; who loves virtue, yet believes that true morality involves identifying opposite virtues and occupying all the space in between; who joined warm humor and disciplined living to passionate commitment.

Perhaps when all is said and done, it is better to remember Adams as a “charismatic sage,” one sent to us in the midst of a century desperately seeking for ways to love and live justly and walk humbly and confidently with God, even when much signaled the resurgent worship of Mars, Baal, Mammon, Pan and Whirl, not to mention the twin idols of Fundamentalism and Secularism. Not all of his message got through; not all of us were prepared to receive it; not everything in it was completely valid. But we have been touched, deeply, personally, and repeatedly by what he brought to us. The world is better for it.

We should not be surprised that the term “charismatic” is applied to a Liberal. It is a term already in use before the rise of the pentecostal movement and before journalists began applying it equally to any rock star who draws crowds or to any religious fanatic who draws federal agents. In re-reading files of his class notes from 1960-1965, I found that the term “charisma” appears prominently in every class, along with “vocation,” “covenant,” “association,” and “responsibility.” Adams introduced the term to his students by pointing to the rise of the prophetic tradition and the formation of the early church. He frequently referred also to the Radical Reformation’s pluriform understanding of the gifts of the Spirit, to Rudolph Sohm’s theory of the Holy Spirit developed in the late nineteenth century, and to Max Weber’s understanding of a “called” individual who, as Weber writes, “is set apart from ordinary men and endowed with exceptional powers not accessible to the ordinary person, but is regarded as exemplary, and … is treated as a leader.”

Specially gifted people sometimes exhaust their friends and try their loved ones, but it can surely be said that he labored well; he used his gifts for others; he often, more than most of us, transcended his limitations; he illumined a stormy century; and he was a blessing to our minds and souls. And so, with deep gratitude for his charismatic wisdom, we commend its gifts not only to the future, but also to God from whence comes every good and perfect, even every imperfect, gift.

We pray that you, James Luther Adams, beloved husband, father, friend, teacher, and presence, may rest in peace. We will remember you.