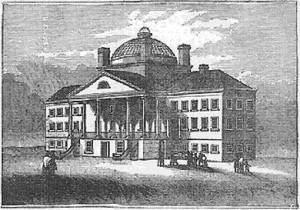 At the beginning of the present (20th) century Boston had no hospital for the treatment of general disease, though there were such institutions in New York and Philadelphia. During many years before his time there were various indications in the community that the want of such an establishment was beginning to be felt; and in the summer of 1810 strenuous efforts were made to supply the want, which proved successful. A circular-letter, dated August 20, 1810, was prepared by Dr. James Jackson and Dr. John Collins Warren, and addressed to some of the most influential citizens of Boston and its neighborhood, for the purpose of awakening in their minds an interest in the subject. It was the opinion of Mr. Bowditch, as recorded in his History of the Massachusetts General Hospital, that this circular-letter might be regarded as the corner-stone of the institution.

Dr. James Jackson, the first signer, is perhaps the most conspicuous character in the medical annals of Massachusetts. No physician in the Commonwealth ever exerted so large and lasting an influence over his professional brethren or his patients. Born in Newburyport, October 3, 1777, graduated at Harvard College in the class of 1796, he studied his profession under the venerable Dr. Holyoke, of Salem. In the year 1812 he was appointed to the Hersey Professorship of the Theory and Practice of Medicine, which he continued to hold until 1836. At this time he gave up the active duties of the office and was chosen Professor Emeritus. His writings are numerous, and all his publications show great wisdom as well as literary culture. During a period of more than half a century he was a frequent contributor to the pages of the New England Journal of Medicine and Surgery, and of the Boston Medical and Surgical Journal. He died on August 27, 1867.