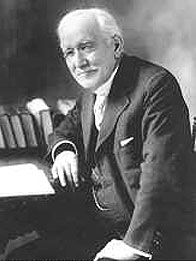 This American Unitarian minister who was born in England launched the first major indictment of British imperialism in India. His attack appeared in 1908 in an Atlantic Monthly magazine article disclosing “The New Nationalistic Movement in India.” Sunderland declared: “India is a subject land. She is a dependent of Great Britain, not a colony. Britain’s free colonies are really self-ruling in everything except their relations with foreign powers. Not so with dependencies like India. They are ruled absolutely by Great Britain, which is not their ‘mother’ country but their conqueror and master.”

His book India in Bondage was suppressed in India but hailed in America by Time magazine.

Jabez Sunderland was the first American to participate in the new Indian National Congress.

Sunderland’s two journeys to India encouraged an alliance between the British and American Unitarian associations and the Brahmo Samaj religious and social reform Hindu movement in India.

From the Ann Arbor Unitarian Church in Michigan, he led the battle for advanced nondogmatic theism against non-theism. When he died in Ann Arbor, his memorial service held at the Community Church of New York celebrated his role in liberating India and his promotion of liberating religion in North America.