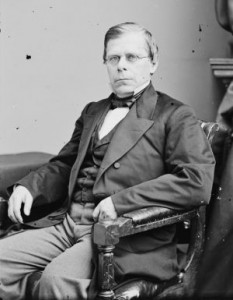 Israel Washburn, Jr. was one of seven brothers from Livermore, Maine who forged distinguished careers, especially in public service. Israel Washburn, Sr. and Martha Benjamin Washburn had eleven children altogether, with three sisters and one brother who died in childhood. Israel, Jr., who was born on June 6, 1813, and his siblings grew up in a rural village with a one-room schoolhouse nearby, and a Universalist Church built half on Washburn property. When Israel was 67 years old he looked back on this era in his life and said, “There was a halo about these times.” Yet life was not purely idyllic. Poverty threatened the family when Israel was only five, as his father went into bankruptcy. The family had a long history of political involvement dating back to the 1630’s. Israel, Sr. was a legislator, and his wife predicted that their first-born son would be governor of Maine, despite his diminutive stature. Israel more than fulfilled his mother’s predictions for political fame. As an anti-slavery representative from Maine to the U.S. Congress, Israel was a leader in the battle to defeat the Kansas-Nebraska Act, which would extend slavery. Despite its passage, Israel remained undeterred in the wake of the vote, saying he was “Alive, hearty and indomitable.”

Washburn was one of the founders of the Republican Party responsible for giving it its name. Then he was governor of Maine during the early years of the Civil War, 1861-1862. Sounding like a true Republican, he warned against the “tendency of things in the direction of centralization.” He later became identified as a Radical Republican. His brother Elihu was a close confidant of Abraham Lincoln. Recent research shows that Lincoln previewed the Emancipation Proclamation with Elihu, who also was responsible for promoting General Ulysses S. Grant. All of the brothers hold a significant place in history. The fourth brother, Cadwallader, was the founder of Gold Medal Flour, which later became General Mills. The youngest brother, William, was called the father of Universalism in Minneapolis, Minnesota and was once president of the National Universalist Convention.

Israel’s career included other significant contributions as a railroad president, collector for the Port of Portland, Maine, and as a key lay leader in the Universalist Church. Historian George Willliams has identified him as one of the pivotal figures in the Universalist church in the 1870’s and 1880’s. He served on national committees, and was president of the board for Tufts College. He clearly identified the American Republic with Universalism, which was the most democratic faith in his view. His blending of Universalism and democracy foreshadowed our understanding of a “civil religion,” which is expressed in the ideals of freedom and equality. This religious counterpart to democracy was seen as the future church of America. In an address he gave for the Universalist centennial celebration, he said the faith was “universal in its scope and ultimate membership, — it will embrace the world.” Israel’s faith continued to be central in his later years. He was serving on a national committee which was considering revisions in the Winchester Profession when he died in 1883.