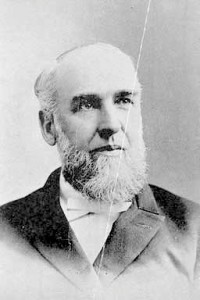 Coming from a poverty stricken, self-educated background, Atwood became one of the foremost leaders of the Universalist church in the late nineteenth century. Atwood worked beginning at age eleven at farming, stable cleaning — and later mule driving on the Erie Canal. He managed to educate himself, convert from the Baptist religion to Universalism, and begin a life devoted to the church and its ministry starting at the age of 23, when he was ordained in September 1861 at Clifton Springs, New York. That same year he married Almira Church, and they had five children. He served a succession of churches in New York, Maine and Massachusetts. He was also editor of The Universalist (later merged with The Christian Leader) from 1867 to 1872. He was minister of the Third Universalist Church in Cambridge, Massachusetts in 1879 when he was chosen the second president of Canton Theological School at St. Lawrence University. Not known as an educator, Atwood had to be convinced to take the position. That same year he received an honorary D.D. from Tufts. He was a decisive leader for the school, but he was handicapped by a lack of funds, especially in his role of fund raiser for the College of Letters, which he helped save in 1886 by working to raise $52,000. During his early years there, the theological school was built and moved into its own building, Fisher Hall.

In 1898 the Universalist General Convention, under intense pressure from a group of ministers who wished to promote denominational unity through “a spirit of loyalty and subordination,” created the position of general superintendent of the Universalist church. Atwood was the first person to assume this position, and he tried ably to unite the denomination, not an easy task with some Universalists fearing that the denomination would become an episcopacy, and Atwood a bishop. Atwood traveled widely in his new role (32,000 miles in the first year alone), visiting churches and state conventions and encouraging missions in the South, the West, and in Japan. He tried to increase fund raising by establishing a “Twentieth Century Fund,” but it fell short of its goal. Atwood did succeed in giving the far-flung and often rural Universalists a sense of common purpose and goals, and a more centralized organizational basis. After his first year he wrote, “I believe more than ever in the Universalist Church — in its ideas, in its usefulness, in its ministry, in its membership, in its mission. I feel that our call has been renewed, and it is, as it was, the call of God.” Robert Cummins writes that Atwood was an “eloquent and able preacher and an inspiring teacher,” but was somewhat less skilled in administration. Over the years he published many books and articles. He retired from his leadership position in 1907, and returned to St. Lawrence University (New York), where he taught philosophy and theology for the last five years of his life, and also ministered to the Universalist Church in Canton. He died on October 26, 1917.