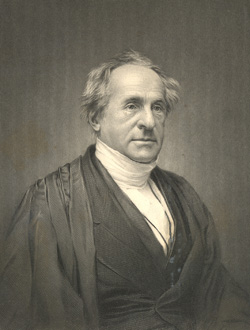 Ichabod Nichols was born in Portsmouth, New Hampshire, July 5, 1784. His parents were Ichabod and Lydia Ropes Nichols, both of whom belonged to old Salem families. The younger Ichabod was fitted for college at Salem, and graduated at Harvard with high honors in the class of 1802. He then began the study of theology under his pastor, Dr. Thomas Barnard, of Salem. He spent four years at Cambridge as tutor in mathematics, and on the 7th of July, 1809, was ordained associate pastor with the Rev. Dr. Deane of the First Church in Portland, Maine. In 1814 he became sole pastor by the death of his senior and continued so until 1855, when a colleague was settled. Dr. Nichols then removed to Cambridge, where he pursued his favorite studies until his death on the 2nd of January, 1859. He received the degree of Doctor of Divinity from Bowdoin in 1821 and from Harvard in 1851.

Dr. Nichols’s ministry in Portland was in some respects unique. It attracted the strong minds and scholarly people of the city, and there can hardly have been a church in New England which had so high an average standard of ability as his. At the same time men of humble origin and occupation were drawn to him by the warmth of his sympathy and the fervor of his devotional spirit, and never has a minister been more beloved by people incapable of appreciating anything but his goodness and warmth of heart. His sermons were full of condensed thought and closely riveted chains of argument. They combined cogent logic and ardent piety, and were aimed both at the intellect and at the affections. Dr. Peabody testifies:

Dr. Nichols was devout with all his mind no less than with all his heart. No one ever heard him talk on any topic of history, science, art, or literature without perceiving that its Godward aspects and relations held the foremost place, that he was tracking the footprints or searching out the thought of the Creator. Thus his meditation on a mathematical law or a problem in mental philosophy or a new fact in natural science or a fine picture was little less than an act of worship. I have never known another person who seemed so constantly filled, energized, and uplifted by vast and glowing views of the divine majesty, wisdom, and love. I often heard him talk on some topic of what is called secular learning when I felt as if I were listening to a grand cathedral anthem, every note laden with adoration.

Dr. Nichols was a profound scholar. Though he graduated from college a quarter of a century before German was taught there, he read German theology and philosophy in the original tongue. He was an adept in many branches of science, and throughout his life maintained his interest in the higher mathematics. Benjamin Peirce, the great mathematician, was his nephew, and uncle and nephew were accounted equals in mastery of their science.

Dr. Nichols, in spite of the comparative remoteness of his place of residence, had a prominent place in many of the public-spirited activities of his generation. He was early elected a member and for a number of years was vice-president of the American Academy of Arts and Sciences. For forty-two years he was a member of the Board of Trustees of Bowdoin College, and for nearly or quite all of that time vice-president of the board and of the college. His lifelong study of the Gospels culminated in two volumes published just after his death, entitled Hours with the Evangelists. His parish also printed a volume entitled Remembered Words from the Sermons of Rev. Ichabod Nichols.

Dr. Nichols was possessed of a commanding presence, and was a natural born leader in every relation of life. He was the second president of the American Unitarian Association, serving from 1837 to 1844.