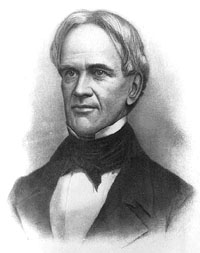 Born in poverty, Horace lived in hardship on the family farm in Franklin, Massachusetts. His schooling was limited to about three months a year. He had mastered the tenets of his family’s Calvinistic faith by the age of ten, but when their minister condemned his dear drowned brother Stephen to eternal damnation, Horace rebelled and later became a Unitarian.

After receiving some private tutoring, he graduated from Brown, studied law, and began his career first as a State Representative and then as a Massachusetts Senator. He was active in the establishment of a state mental hospital in Worcester. Nevertheless, Senator Mann abandoned his highly promising political career and, in 1837, accepted the position of his state’s first Secretary of the Board of Education. He encouraged the first Normal School for teachers. He advocated the establishment of free public libraries. State and local support to education soon doubled. In Mann’s famous twelve annual reports, he insisted that it is necessary for the state to assume the responsibility to educate each child as a natural right. Compulsory school attendance began. Schools must receive non-sectarian support though taxation.

In 1853 Horace Mann became the President of Antioch College in Ohio, implementing the ideal of coeducational nonsectarian higher education. Raising funds weakened his health, but Antioch students heard the words shortly before his death: “Be ashamed to die before you have won some battle for humanity.”