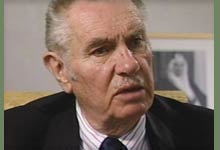 Herman Frederick Eilts was born on March 23, 1922, in Weissenfels, Germany. He earned his B.A. from Ursinus College in Pennsylvania in 1943 and his M.A. from Johns Hopkins in 1947. Eilts joined the foreign service in 1947, and for the next 32 years focused almost exclusively on the Middle East during his assignments at overseas posts and at the State Department. From 1965 to 1970, Eilts was U.S. Ambassador to Saudi Arabia and to Egypt between 1973 and 1979. He has been a Deputy Commandant at the U.S. Army War College, a member of the Board of Trustees of the American University in Cairo, and is Professor Emeritus at Boston University.

—Condensed from the BU Bridge and NNDB.com