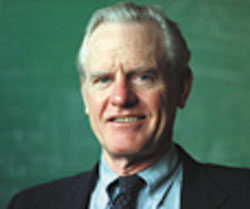 Professor Henry W. Kendall, a 1990 Nobel laureate in physics and longtime environmentalist, died on February 15, 1999, while exploring the wilderness he loved and worked to preserve. He was 72 years old.

“Henry Kendall’s death is a terrible loss to MIT, the scientific community and the world at large,” said Professor Jerome Friedman, an MIT colleague with whom Kendall shared the Nobel Prize. “Henry was an outstanding scientist and an outstanding human being who worked tirelessly for the betterment of society. He always saw the big picture and identified the big problems. He used political and scientific activity effectively to advance such goals as arms control, nuclear safety and a better environment.

Professors Friedman and Kendall, along with Professor Richard Taylor of Stanford University, were the key members of the research team that found the first confirming experimental evidence for the quark model.

In addition to his intellectual accomplishments, Professor Kendall was an expert mountain climber and scuba diver. An accomplished photographer, he chronicled his climbing and underwater adventures and enjoyed sharing the photographs with friends.

Born in Boston on Dec. 9, 1926, Professor Kendall grew up in Sharon, MA, and attended Deerfield Academy. He was in basic training at the US Merchant Marine Academy in 1945 when the first atomic bomb was dropped, and he served on a troop transport ship in the North Atlantic in 1945-46, at which time he transferred to Amherst.

Professor Kendall, a founding member of the Union of Concerned Scientists (UCS) in 1969, served as its chair for the past 25 years. He was deeply involved with arms control and nuclear power safety issues. He played a leading role in organizing statements about global problems from the scientific community, including “The Call for Action” at the Kyoto Climate Summit in 1997 and the “World Scientists’ Warning to Humanity” in 1992. He was on a panel of scientists who briefed President Clinton on the dangers of global warming in 1997.

Click here for supplemental reading about Henry Kendall on Amazon.