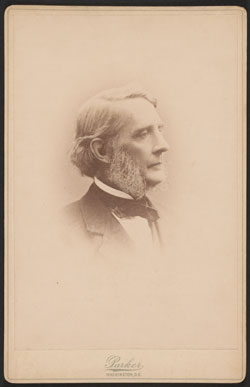 Henry Frederick Bond was born in Boston on May 12, 1820. His father was a prosperous commission merchant.  He graduated at Harvard in 1840, and after some travel for his health, he graduated from the Harvard Divinity School in 1845. He was ordained at the Unitarian church in Barre, Massachusetts on January 6, 1846, and served the First Parish for four years. Then followed brief pastorates at Dover, New Hampshire, and Sudbury, Massachusetts, and in 1869 he went as a pioneer minister to Omaha, Nebraska, then still a frontier but fast-growing community. There, he ministered to the newly organized Unitarian Church, and saw that congregation into its first building.

In 1870, President Ulysses S. Grant invited Protestant denominations to take over the management of American Indian reservations and agencies. His hope was that this move would cut down on reported government corruption while simultaneously helping to “civilize” the Indians. The American Unitarian Association (AUA) accepted charge of the district covering the Colorado reservation occupied by various tribes of the Ute, consisting of about 8,000 people.  It was under this program that 1874 Bond accepted appointment as United States Indian Agent among the Utes at Los Pinos agency in Colorado in 1874.  His mission was to maintain a “strictly honest administration of government affairs” and “to meet the Indians in a humane, Christian spirit, saving them from trickery, robbery, intemperance, and other vices of frontier life; and to present to them the better phases of a Christian civilization.”

During the opening worship service of the Unitarian Universalist Association’s General Assembly in 2009, UUA President William G. Sinkford offered a formal apology to the Utes on behalf of the Association for past crimes against their people. “We participated, however ineptly, in a process that stole your land and forced a foreign way of life on you,” he said. “We ask for your forgiveness, and we promise to stand with you as you chart your way forward.”

Bond only lasted two years in in Los Pinos , returning to Massachusetts, taking up pastorates at Northboro and Nantucket.

In 1886 The American Unitarian Association undertook to construct and open a Mission School on the Crow Reservation in Montana and invited Bond, then in his sixty-seventh year, to oversee the school.  Even eventually the government took over the operation and administration of the School and Bond retired to West Newton, Massachusetts. He died at Bethlehem, New Hampshire, August 22, 1907, in his eighty-eighth year.