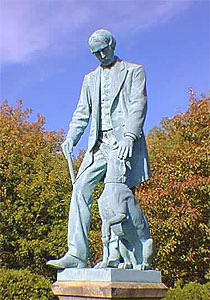 Courtesy of the Wisconsin Humane Society.

Born in New York City, Henry and a brother ran their retired father’s shipbuilding company. When President Lincoln appointed Henry Bergh secretary of the American Legation in Russia, he was horrified to see animals treated cruelly. A visit in London to the Royal Society for the Prevention of Cruelty to Animals awakened his decisive action to secure a charter not only to incorporate the American Society for the Prevention of Cruelty to Animals but to exercise the power to arrest and prosecute violators of the law. Local governments across the United States and Canada formed similar societies affirming: Animals have rights! Animal beatings and cockfights are illegal! Sick or injured horses can no longer be left to die on the streets!

In 1874 an incident of abuse of a child named Mary Ellen led people to join with Bergh in establishing the New York Society for the Prevention of Cruelty to Children.