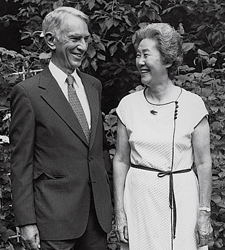 Haru Matsukata Reischauer was an author, granddaughter of a Japanese prince, and wife of the statesman and scholar for whom Harvard’s Reischauer Institute of Japanese Studies is named. Born in Japan in 1915, she attended schools in Tokyo and was a graduate of Principia College in Illinois. Her paternal grandfather, Prince Masayoshi Matsukata, was prime minister and finance minister of Japan in the late 19 th century and was among the most important leaders of the movement to modernize the nation. Her maternal grandfather was Ryoichiro Arai, an entrepreneur in the silk trade.

After World War II, Mrs. Reischauer worked at several American newspapers and magazines in Tokyo. In 1956 she married Professor Edwin O. Reischauer, a Harvard specialist in East Asian history and politics. Edwin Reischauer was appointed ambassador to Japan by President John F. Kennedy in 1961. During their posting to Tokyo, Professor and Mrs. Reischauer worked to build a strong Japan-United States relationship despite increasing anti-American sentiment in Asia. They returned to Cambridge in 1966. Edwin Reischauer was the driving force in the founding of Harvard’s Japan Institute, which now bears his name. Mrs. Reischauer researched and wrote a memoir about her grandparents, Samurai and Silk: A Japanese and American Heritage.

Samurai and Silk: A Japanese and American Heritage by Haru Matsukata Reischauer.