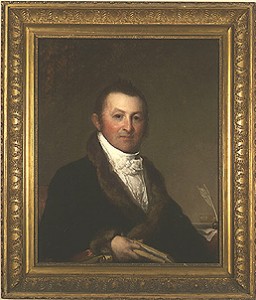 Portrait by Gilbert Stuart, 1809. Courtesy of the Society for the Preservation of New England Antiquities.

This Unitarian businessman and lawyer was appointed by George Washington as a U.S. district attorney for Massachusetts and served as one of the original incorporators of the Boston Bank. A strong advocate for centralized government, Otis warned that Napoleon’s mounting victories might “roll toward our shores.”

His public service included terms in both the U.S. House of Representatives (1797-1801) and the Massachusetts state legislature (1802-1817). He was the primary actor in the controversial Hartford Convention of 1814, a gathering that favored states’ rights. From 1817 to 1822 Otis served as a U.S. senator, returning to Boston in 1829 to serve as its mayor.

The elegant Harrison Gray Otis House in Boston is now the home of the Society for the Preservation of New England Antiquities.