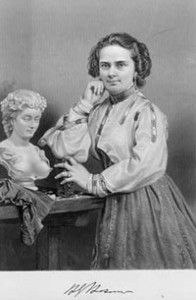 This pioneer woman sculptor was a descendant of James Hosmer, who came from England to Massachusetts in the 1630s. Since her mother died of tuberculosis when Harriet was four, her father encouraged her outdoor life. At Mrs. Charles Sedwick’s School in the Berkshires, her Unitarian school classmates, novelist Catherine Maria Sedgwick and actress Fanny Kemble, suggested that she become a professional sculptor.

Medical schools then denied women students, but a friend of her physician father taught her anatomy. When she was studying in Rome, her overseer was actress Charlotte Cushman. John Gibson, an English sculptor, accepted her as his only student.

Of her many works, the amusing “Puck” playing on a toadstool was purchased by the Prince of Wales. Because of its popularity, she created 50 replicas which sold for $1,000 each. A colossal statue of Senator Thomas Hart Benton was commissioned by the state of Missouri. When Harriet’s detractors claimed her work was done by male assistants, she brought a libel suit, and wrote in defense an authoritative Atlantic Monthly article on “The Process of Sculpture.”

Among the sculptor’s many friends in Rome were Robert and Elizabeth Barrett Browning.