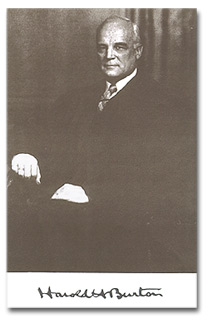 Harold Hitz Burton was born into a Unitarian and Republican family in Jamaica Plain, Boston, the son of a civil engineering professor at the Massachusetts Institute of Technology. Young Harold lived with his mother in Switzerland, but she died when he was seven years old, and he returned to Massachusetts. After attending public schools in Boston, Burton matriculated at Bowdoin College, from which he graduated Summa Cum Laude in 1909. He was not only a member of Phi Beta Kappa but also quarterback of the football team. He proceeded directly to Harvard Law School and by 1912 had a law degree, a wife, and two tickets to Cleveland, where he believed it would be easier to establish a law practice than in the East. Burton and his wife, childhood friend Selma Florence Smith, settled happily in Ohio, raising four children in the state that was to elect and reelect him, first as Mayor of Cleveland and later as a United States Senator.

At the beginning of his career, Burton practiced law in Cleveland and Salt Lake City alongside his wife’s uncle, successfully working for various Utah power companies. World War I inspired a hiatus in his legal career, however, as he volunteered for the U.S. infantry. Burton entered the army as a First Lieutenant and finished the war a Captain, decorated with the Purple Heart and with Belgium’s Croix de Guerre. In 1919, he returned to Ohio to resume his career in corporate law, picking up a teaching job at Western Reserve University Law School in 1923. In 1925 he established his own firm: Cull, Burton & Laughlin. All along, his mind was set on gaining the experience necessary to fuel a career in politics.
Once begun, Burton’s political career took off quickly. Elected to East Cleveland’s Board of Education in 1927, he joined Ohio’s House of Representatives the following year, moving on to become Cleveland’s director of law in 1929. After returning to legal practice from 1932-35, Burton decided to run for Mayor of Cleveland. He won, was twice reelected, and remained Mayor until his 1940 election to the United States Senate. 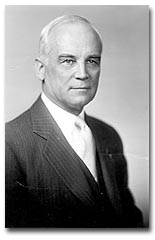 As Mayor, Burton gained a reputation for returning economic well-being to Cleveland’s citizens by combating organized crime and developing employment programs. Indeed, his reputation for pious dedication to his family and his constituents earned him the moniker “the Boy Scout Mayor.” In the Senate, Burton became known as generally liberal in international affairs and conservative in domestic ones. The highlight of his career in the Senate was sponsorship of the 1943 “B2H2” resolution, which called for the United States to join an organization promoting international peace after the war.

Burton also belonged to a number of organizations, including the Masons. He also served as moderator of the American Unitarian Association, representative of all Unitarian parishes in the United States and Canada.

The highlight of Burton’s political career came in 1945, when the retirement of Justice Owen Roberts left an open seat in the United States Supreme Court. Because President Roosevelt had appointed only Democrats to the Court, Truman was effectively compelled to choose a Republican to fill the empty seat. Burton, a moderate Republican with whom Truman had served on the Senate Special Committee to Investigate the National Defense, proved an ideal choice. The Senate unanimously approved Burton’s appointment less than twenty-four hours after Truman submitted it. 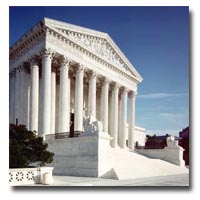 While on the Court, Burton gained a strong reputation for a hardy work ethic and humble adherence to his legal ideals. He was known for working eighty or ninety hours each week, eating at his desk and leaving his judicial chambers for little more than requisite social functions. He tended to vote in favor of government control of social matters and against government control of economic ones. Notably, he tended to advocate racial integration and to oppose the aggrandizement of union power and antitrust legislation. His particular opinions, however, varied from case to case.

Brown v. Board of Education was, perhaps, the most significant case tried by the Court during Burton’s tenure. In this famous case, the nine justices unanimously decided against the constitutionality of racial segregation in public schools. Burton described the case’s importance in a letter he wrote to Chief Justice Warren in celebration of the Court’s unanimity: ‘I expect there will be no more significant decision made during our service in the Court,” Burton said. “I cherish the privilege of sharing in this.”

Diagnosed with Parkinson’s disease in 1957, Burton retired from the Court the following year. He held out, however, to see an Arkansas desegregation case to its close. President Eisenhower selected Potter Stewart to fill Burton’s place. Burton then served for four years in the D.C. Circuit Court until his death. By all accounts, Justice Burton was deeply admired as a public servant.

BURTON, Harold Hitz, a Senator from Ohio; born in Jamaica Plain, Mass., June 22, 1888; attended the public schools; was graduated from Bowdoin College, Brunswick, Maine, in 1909 and from the law department of Harvard University in 1912; was admitted to the bar in 1912 and commenced practice in Cleveland, Ohio; assistant attorney for a power company in Salt Lake City, Utah, 1914-1916 and attorney for a power company in Boise, Idaho, 1916-1917; during the First World War served in the army as lieutenant, and later as captain, in 1917 and 1918; resumed the practice of law in Cleveland, Ohio, in 1919; instructor in Western Reserve University, Cleveland, Ohio, 1923-1925;

member of the board of education of East Cleveland in 1928 and 1929; member, State house of representatives 1929; director of law of Cleveland 1929-1932; mayor of Cleveland 1935-1940; elected as a Republican to the United States Senate in 1940 and served from January 3, 1941, until his resignation on September 30, 1945; associate justice of the Supreme Court of the United States from 1945 until his retirement October 13, 1958; was a resident of Cleveland, Ohio; died in Georgetown University Hospital, Washington, D.C., October 28, 1964; cremated at Highland Park Cemetery, Cleveland, Ohio.

“Why I Believe in Advancing Unitarianism”
by Harold Hitz Burton

I believe in Advancing Religious Liberalism because I believe that God is at the foundation of life, and the truest possible understanding of God is the best road to peace and progress on earth. I regard religious liberalism as but another name for search for the truth in the field of religion wherever that truth may be found.